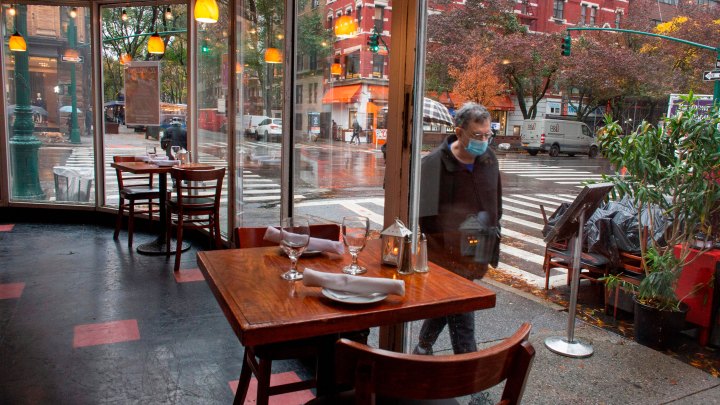 COPY
Empty chairs are seen inside a restaurant in New York on Nov. 13, 2020. Businesses whose PPP loans are forgiven are not allowed to claim deductions on expenses that were paid for using loan money. Kena Betancur/AFP via Getty Images
COVID-19

Empty chairs are seen inside a restaurant in New York on Nov. 13, 2020. Businesses whose PPP loans are forgiven are not allowed to claim deductions on expenses that were paid for using loan money. Kena Betancur/AFP via Getty Images
Listen Now

This is about the time of year when businesses across the country start figuring out their taxes: How much money they made this year and how much they spent on business expenses. But this year, there’s a new and thorny wrinkle in that process for businesses that received Paycheck Protection Program loans.

A few weeks ago, Randy George got an email about his bakery — the Red Hen Baking Co. in Middlesex, Vermont — from a business advocacy group. The email was a warning for businesses that received Paycheck Protection Program loans or other pandemic relief.

“For many of you, that will create a 2020 Income Tax liability that will need to be paid early in 2021,” the email read.

A tax liability early next year would be painful,” George said. It’s getting colder, and business is already slowing down. Virus cases are rising.

George said the PPP loan got the bakery through the spring and summer, but the threat of a big tax bill?

“It makes you wonder if it’s gonna come back around to bite us,” he said.

Under current rules, businesses whose PPP loans are forgiven are not allowed to claim deductions on the expenses the loan money paid for: payroll, utilities, rent.

“The indirect situation here can be one for a number of businesses where you’re going to end up paying taxes on that money, even though that’s not necessarily what was intended,” he said.

Hetrick said he’s advising his clients to hold off on applying for forgiveness. The thinking is maybe the rules might change to allow expenses to be deductible.

“You certainly want to be careful about making any decisions that then lead you to pay tens or hundreds of thousands of dollars in taxes, right as you’re coming out, hopefully if we’re lucky, of another wave of coronavirus,” he said.

The bottom line is small businesses are facing a ton of uncertainty about the taxes they may owe on their PPP loans. Hetrick said he’s still not sure when a business should say the loan was forgiven: “Is it something you would recognize in 2021’s tax year? Would it happen in 2020? What’s the interplay between those two things?”

All of that means small business owners are preparing for uncertain tax bills. Jackie Laundon is a public health consultant based in Colorado who got a PPP loan.

“When I get a payment from a client, I just automatically deduct about a third of it to put into a tax account and just try and pretend that money’s not there,” she said.

Laundon said it’s not easy to set aside cash that she could otherwise spend today.

“I was just looking at whether I could let up a little bit on those estimates, and I think, just on the edge of caution, I’m gonna keep estimating it the way that I have been,” she said.

That way, she’ll be able to cover a bigger-than-expected tax bill if she gets one next year.