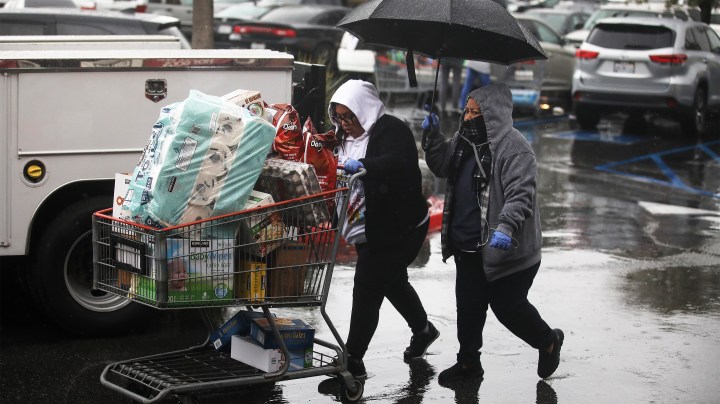 COPY
Shoppers stock up at a Costco in Glendale, California, on March 14. Mario Tama/Getty Images
COVID-19

Shoppers stock up at a Costco in Glendale, California, on March 14. Mario Tama/Getty Images
Listen Now

The other day, I visited Lindsay Garfield at her studio apartment in a tall building on the Upper East Side of Manhattan. She’s 30 and works for a commercial real estate company.

Her apartment is only about 400 square feet — not a lot of room for stockpiling. But she’s doing her best.

She showed me into her tiny kitchen and swung open one of the surprisingly large cabinets.

“I cannot reach the top, but I do have a stepladder,” she said. “So I have all my tuna, my soup, cans of sauce. A lot of pasta, rice, potatoes.”

She has also stocked up on bottled water, yogurt, avocados and Lysol.

“Having all this stuff, I guess makes me feel a little better,” she said. “Like, oh, I’m prepared. I have food if I need it. I have all the cleaning supplies. I’m doing my best. I’m washing my hands and sanitizing my apartment. And that’s all I can do.”

Garfield is not sure how prepared she needs to be right now.

Across the country, the lines at the grocery store are getting longer and there are sections that are totally picked over. Turns out many of you are trying to find the line between overdoing it and underdoing it.

That’s been a real, personal dilemma for Dan Haggarty, who’s 32 and lives in Reno, Nevada.

“Some people in my family, particularly my father, will occasionally go out and stock up whenever he believes there’s an impending crisis, and it always just seems to be kind of a waste, and I’ve always just kind of rolled my eyes at it,” he said.

Recently he helped his father move, and they had to throw out an old plastic jar of applesauce.

“I didn’t know applesauce would change color, but it did,” he said. “It turned kind of, uh, almost like a dark brown. So I kind of was disturbed by that.”

But about a week ago, as Haggarty saw the shelves emptying quickly, he gave in and filled up his cart with nine or 10 packages of toilet paper.

While you don’t need to buy a year’s supply of toilet paper right now, it is rational to buy some extra supplies.

Miranda Fleischer, who’s 48 and lives in San Diego with her 11-year-old daughter, Penelope, has gone shopping several times over the past couple weeks. She’s been filling her cupboards and her fridge with food.

Fleischer said she has to be prepared, because if they get sick, there’s no one who can really help them.

Penelope’s dad lives an hour away. He has diabetes, “and he’s just generally not as healthy as we are,” Fleischer said. “He’s a wonderful guy. He would normally be here in a pinch to help us out, but I just wouldn’t ask him to.”

The same goes for Fleischer’s mom, who’s 76 and lives in Indiana.

Fleischer said she’s struggling, though, with how much to buy. She wants them to have enough food so they can stay home.

“If it gets bad in San Diego, which I expect it will, the fewer times we have to go out, I feel like the better,” she said. “I just want to help flatten the curve, as they say.”

But she doesn’t want to hoard either.

And neither does Alan Macdougall, who’s 54 and lives with his wife, his 15-year-old son and their three cats in Connecticut.

Macdougall has been buying extra food and toilet paper, but he’s being careful not to overload his cart.

He’s bought stuff like kimchi ramen, which he loves. “Like the other day I went into the store and there were six, so I bought three,” he said.

He wanted to leave some for everybody else.

“If I take the last one of everything I think I need, you know, someone else is just not going to have anything,” he said. “And I don’t want to be that person that puts somebody else into that position. I think you need to think about the people around you.”

This weekend, he did go back and buy a few more.