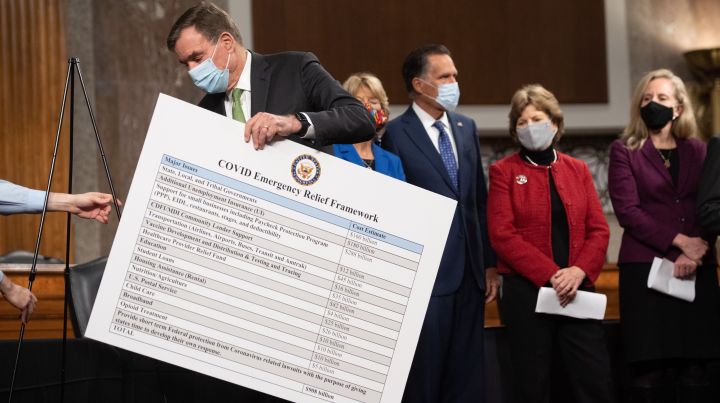 Everything should have become a little easier for Kiarica Schields after Congress passed the last COVID-19 relief package at the end of December and President Donald Trump signed it into law.

On paper, that legislation extended her unemployment benefits, which were about to expire, and entitled her — and everyone on unemployment — to an extra $300 a week from the federal government through mid-March.

But in reality, Schields, who lives in Norcross, Georgia, with her four kids, hasn’t received any of that money. Instead, her benefits have stopped entirely.

The last time she received an unemployment check — for $211 — was early December. Since then, even though she’s kept filing, and even though Georgia’s unemployment system keeps telling her her claims have been accepted, she hasn’t received a thing.

She doesn’t know how she’s getting by right now.

This is happening to people across the country — even though they are still eligible for unemployment, their benefits have stopped.

“These are people who applied right at the beginning of the pandemic,” said Michele Evermore, a senior researcher and policy analyst at the National Employment Law Project. People who had been collecting unemployment since March were on the verge of exhausting their benefits in December.

Then, just before Christmas, Congress passed the COVID relief package that extended benefits for people who were about to lose them, and also reintroduced a supplemental federal benefit — an extra $300 a week for everyone on unemployment. Five days later, President Donald Trump signed it into law.

But all of that happened too late, when many people’s benefits had already expired or were about to.

“States had to scramble to reprogram in time to keep benefits flowing smoothly,” Evermore said. “In most states, there was a disruption in paying benefits.”

“All of that is resulting in a huge interruption in payments for a lot of folks,” said Rachel Deutsch, an attorney at the Center for Popular Democracy.

Once states get their systems back up and running, people who have experienced a lapse in benefits should get weeks of back pay, according to Evermore, as long as they have continued to file weekly claims.

But in many states, she said, “if somebody’s benefits stopped before Christmas, they may be among the last to get their benefits turned back on again.”

So far, Deutsch said, many are still waiting.

“We are definitely hearing from quite a lot of people, especially in the states that are sort of notorious for underinvesting in their administrative systems.”

That includes Georgia, where Kiarica Schields has already been waiting for more than six weeks. She doesn’t know how much longer she can go.

She’s not used to not being able to provide for her four kids, who are between 1 and 11.

“This has to have been my lowest I’ve ever been, as a mom or a person,” she said. “My kids asking me for stuff, and I have to tell them no, because I can’t afford it? I don’t like that.”

Before the pandemic, Schields felt solid. She was working full time as a licensed practical nurse doing home hospice work and studying to get her registered nursing degree. She had savings and was starting to think about buying a home.

Then, when COVID-19 hit and her kids’ school and day care closed, she had to stop working to stay home with them.

Now, with no money coming in at all, she’s getting desperate.

“I got a call from my rent office saying that I need to pay before the first or they’re gonna have to file an eviction,” she said. “My gas bill is saying ‘This is your final disconnect notice.’ Light bill saying the same thing.”

Schields paid part of her rent with her credit card “to show them that I’m trying,” she said, and some of her utilities, too, “because those are the two things I really need with the kids — gas, because it’s cold, and my lights.”

But now she can’t even do that anymore. Her credit card is maxed out.

“I’m hoping that I get the stimulus, or I’m hoping I can file my taxes already, or something to catch me up,” she said, trying not to cry. “Because I literally have nothing.”

Her kids are finally back in school and day care, so she’s hoping she’ll be able to go back to work at her old job. But to do that, she needs to find a way to buy a car, because the only job her employer has for her is an hour and a half away.