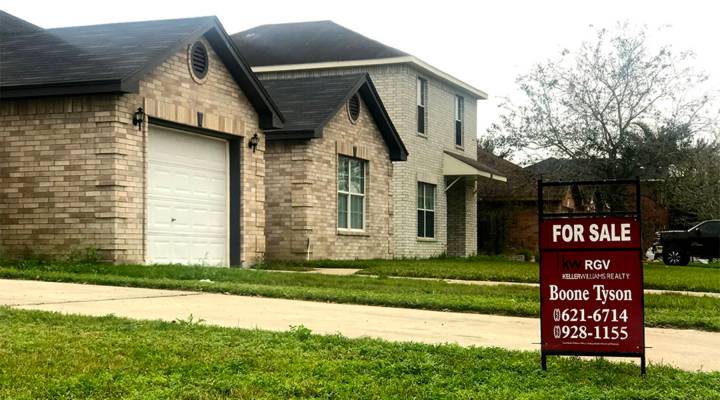 COPY
A two-story home for sale in McAllen, Texas on Feb. 1 2019. The median home value in McAllen is about $140,000. Andy Uhler/Marketplace
Business on the Texas-Mexico border

A two-story home for sale in McAllen, Texas on Feb. 1 2019. The median home value in McAllen is about $140,000. Andy Uhler/Marketplace
Listen Now

Editor’s note: Marketplace’s Andy Uhler spent a week reporting about doing business on the Texas-Mexico border during a time of intense debate over U.S. immigration policy and the push by President Donald Trump to build a border wall. Below is the seventh entry from his reporter’s notebook. You can read the other entries here.

In some ways, McAllen, Texas is a pretty good place for a first-time home buyer. The median home value is about $85,000 less than the national figure. But the intense debate over the building of a border wall and McAllen’s proximity to one of Mexico’s most dangerous cities, Reynosa, make the real estate scene in this city of 142,000 a little different to other affordable cities in the U.S.

Looking for his first house

Lopez has lived in the area for 23 years. He helps his parents run a catering business and, while he rents a place right now, feels ready to buy. “It will be about the same amount of money, so I’d rather spend it on a mortgage than be paying someone else rent,” he said. The 1,500 square-foot place Lopez is viewing is listed beneath the median home value in McAllen of about $140,000.

A cheaper place to live

It’s that kind of affordability that brought real estate investor Amira Kalifa back to her hometown about three years ago. She and her husband were living five hours north in Austin, where the median home price is above $350,000. “We loved Austin but, moving back here, I mean, the cost of living is so much cheaper,” she said.

They bought a 1,700-square-foot place in McAllen for $125,000. That’s just above $70 per square foot. Kalifa was paying more than twice that in Austin. She said McAllen’s affordability really hit home when she was doing her taxes. She compared her tax bill from her house in Austin, which she still owns, to the one in McAllen. “Literally, I messaged my husband, ‘It’s like five times cheaper to live in McAllen than it is to live in Austin.'”

Property taxes in McAllen are lower than Austin, which means the city’s public schools receive less funding. But that hasn’t stopped McAllen from becoming a bit of a boom town. The population is surging. Sales of existing homes in February were up 8 percent on last year, bucking the national trend.

Some of those who have moved to McAllen are affluent Mexicans who fled drug-related violence across the border. “There is a lot of money invested here by people from Monterrey and from Reynosa,” said Ben Ruiz, a sociologist at the University of Texas Rio Grand Valley.

It can be a bit tricky for Mexican citizens to land a mortgage. Maria Gonzales found that out recently, when she borrowed money to build a house in McAllen. She’s a U.S. citizen, but got financial help from her two brothers, who are both Mexican citizens. She says that threw a wrench into the process. “They’re going to ask you for a lot more, like a down payment, a huge down payment,” she said. “It’s a lot harder.”

Buying a house also takes longer for Mexicans, with more paperwork and added financial scrutiny. As political tensions rise, Ronnie Ontiveros, a McAllen realtor, said she sees fewer Mexican citizens shopping for houses in McAllen. “They don’t feel as welcome,” she said. “We had a lot more Mexican nationals that used to come and buy homes here, but within the last couple of years, that’s declined.”

Obstacles aside, as long as violence south of the Rio Grande River remains a problem, Ontiveros said, there will always be Mexicans who want to move to McAllen.