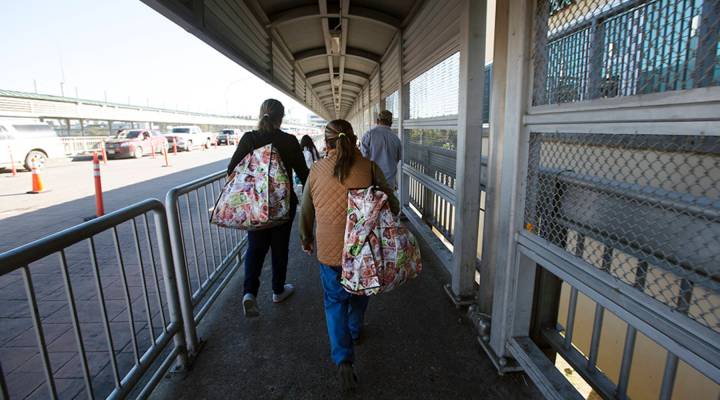 COPY
It’s hard to know exactly how many people live in Mexico and work in the U.S. but thousands of people cross in both directions every day in Laredo, Texas. Filipa Rodrigues/Marketplace
Business on the Texas-Mexico border

It’s hard to know exactly how many people live in Mexico and work in the U.S. but thousands of people cross in both directions every day in Laredo, Texas. Filipa Rodrigues/Marketplace
Listen Now

Editor’s note: Marketplace’s Andy Uhler spent a week reporting about doing business on the Texas-Mexico border during a time of intense debate over U.S. immigration policy and a push by President Donald Trump to build a border wall. Below is the sixth entry from his reporter’s notebook. You can read the other entries here.

LAREDO, TX – Fernando Alonso is finishing up his shift at El Meson, a Mexican restaurant in downtown Laredo, Texas. The 22-year-old waiter is feeling pretty good about his haul of tips on this recent weekday. He’ll clean up his section, hop in his car, and make the half-hour trip home to Nuevo Laredo, Mexico.

The thing is, Alonso is a U.S. citizen, born and raised in Laredo. He chooses to live across the border.

“Rent is cheap,” he said. The average price for a two-bedroom in Nuevo Laredo is about $275 per month. A similar apartment in Laredo goes for at least three times as much.

Alonso’s wife and young daughter are Mexican citizens and he’s working on their U.S. citizenship papers. He says in the meantime he’s saving a hundred dollars a week to buy a house. “We can do that because life is cheaper over there,” he said.

When Alonso does buy a house, it’ll be on the U.S. side. He wants his kids to go to school in Texas and says it’s safer than the Mexican side.

For Border residents, no sense of a national emergency

This is a time of great national debate over immigration and the best way to protect the Mexico-U.S. border. To hear President Trump tell it, the border is something of a hellscape, overrun with criminals, gang members, and drugs pouring into the U.S.

The debate over the building of a wall to divide the U.S. and Mexico led to a partial shutdown of the U.S. government, causing significant economic pain. These days, the U.S. is in a state of national emergency over the border. But all of this paints a picture many border residents don’t recognize. Like Alonso, they cross over the border all the time, to get to jobs or their homes, with no problems. Living on the border, they see unique economic opportunity.

Another Laredo waiter, Monico (we’re not using his last name because he’s worried about his legal status), is a Mexican citizen with U.S. permanent residency. He maintains apartments on both sides of the border.  When starting his day from Nuevo Laredo, he parks his car near the border, then takes a ten-minute walk across the international bridge to wait tables in Laredo. Like Alonso, he wants to earn as many dollars as he can and aspires to buy a house on the American side of the border.

“Working here is much better for me than working in Mexico,” Monico said in Spanish. “The wages in Mexico are much lower than here.” People in Monico’s position, Mexican citizens working in the U.S., could wind up in immigration courts and stripped of residency permits if U.S. immigration officials believe they’re abandoning their residences within the U.S. in favor of living in Mexico.

It’s hard to know exactly how many people live in Mexico and work in the U.S. But Federico Schaffler, director of the Texas Center for Border Economic and Enterprise Development at Texas A&M International University in Laredo, said that the arrangement was widespread. Schaffler himself drives back home to Mexico every night after work. He said this type of cross-border existence was common in border towns, from Tijuana to Matamoros.

Federico Schaffler studies cross-border commerce at Texas A&M International University in Laredo. He commutes across the Mexican border every day. He lives in Nuevo Laredo but has a work visa for his job in Laredo.

“It’s better for their their personal economy,” he said. “They earn dollars and they spend pesos.”

The free flow of people and commerce across the border is something that Laredo Mayor Pete Saenz is keen to protect. He’s opposed to President Trump’s wall, partly because it would hurt business.

“Our local economy is 40 to 50 percent based on commerce, on people coming into the U.S. and shopping at our stores,” said Saenz. “So it’s a delicate balance for us.”