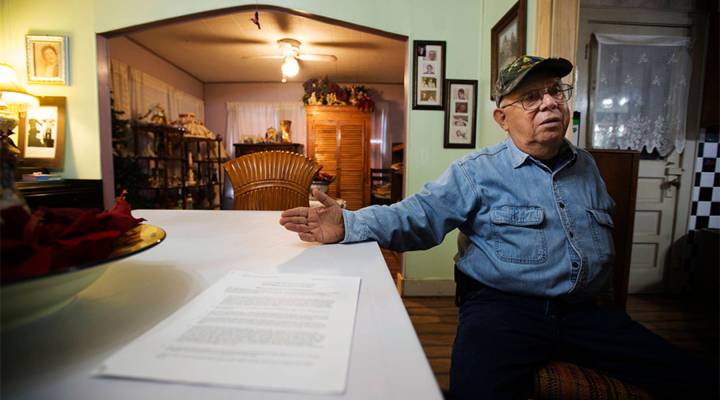 Rey Anzaldua, 73, sits in his cousin Fred’s dining room on Thursday, Jan. 31 2019, mulling over documents the federal government has sent the family seeking permission to build a wall on their land. He says the family will never sign over the rights and the government will have to take the land through eminent domain if a wall is going to be built on their property. Filipa Rodrigues/Marketplace
Business on the Texas-Mexico border

Rey Anzaldua, 73, sits in his cousin Fred’s dining room on Thursday, Jan. 31 2019, mulling over documents the federal government has sent the family seeking permission to build a wall on their land. He says the family will never sign over the rights and the government will have to take the land through eminent domain if a wall is going to be built on their property. Filipa Rodrigues/Marketplace

Editor’s note: Marketplace’s Andy Uhler is just back from a week of reporting about doing business on the Texas-Mexico border, during a time of intense debate over U.S. immigration policy and a push by President Donald Trump to build a border wall. Uhler is sharing some small stories along the way. Below is the fourth entry from his reporter’s notebook. You can read the other entries here.

Jose Alfredo (Fred) Cavazos and Reynaldo (Rey) Anzaldua, a pair of cousins who, along with Fred’s sister Eloisa own 77 acres of land along the Rio Grande, have achieved a level of notoriety they never expected.  All because of a planned border wall that would bisect their property.

Cavazos, 69, and Anzaldua, 73, raise longhorn cattle and goats on some of their land, and lease sections to others, outside of Mission, Texas, a city of 84,000 near McAllen. Cavazos and Anzaldua are fighting like mad to block new sections of the wall. They view additional border barriers as disruptive to their livelihood and family history.

“I spent a lot of time here working on the farm,” Anzaldua said. “Grandmother was the type of lady who would get me and Fred and tell us to go to work. So we did. Me and him worked our butts off here on this land.”

Fred Cavazos, 69, sits in his kitchen on Thursday, Jan. 31 2019, looking at maps of his 77 acres detailing where a planned border wall would be built. The wall would create a barrier between his home and his farmland and rental property only a two-minute drive away . “We don’t even know if we’re going to get a gate,” Cavazos said.

In March, Congress approved $641 million for 33 miles of new wall in Texas’ Rio Grande Valley, where many miles of barrier already exist. Many landowners in the valley believe opposition to the wall is futile and have allowed the government to take soil samples, survey the flood plain and plot the final path for a wall. This part of Texas has been a hotbed for human trafficking for decades and is one of the specific locations the Trump administration has pinpointed for additional barriers.

Every couple of weeks for more than six months, Cavazos and Anzaldua have received letters from the federal government imploring them to grant “right to entry” access to their land. The latest proposed map of the area shows a red line running through their property that would cut their land in half. It’s right in the middle of a six-mile stretch where construction of the wall is scheduled to start in just a couple of weeks.

But they’re continuing to resist. They’ve organized neighborhood meetings to discuss how to construct a unified front against the wall coming through this part of Mission. They’ve become media darlings, willing to grant local TV crews and international newspapers access to their land and documents.

On my recent visit to South Texas, Anzaldua invited me into his kitchen (after he wrapped up another interview with a local TV station) to talk about his opposition to the wall and where things currently stand. Earlier that morning, Cavazos and Anzaldua met with an assistant U.S. district attorney to discuss their pending legal battle against the wall running through their property. With the help of the Texas Civil Defense Project, Cavazos and Anzaldua are suing the feds with the hope that border wall funding will be diverted elsewhere and their land will remain whole.

“[The assistant district attorney] said the only thing that we could fight in court was actually the amount of money we were going to get for the land,” Anzaldua told me as we looked over maps the federal government gave them detailing where the wall would be erected. “And I asked him, ‘Does it mean that we’re going to go to court and it’s already a foregone conclusion that we’re going to lose?’ He didn’t say ‘yes’ or ‘no’ but it seems that they’re not giving us a chance to really fight this,” he said. “That’s un-American.”

The federal government sent Fred Cavazos the plan detailing where the border wall would run through his family’s land. The satellite map shows a red line where the wall is to be constructed. He worries about having access to his land and the river if plans don’t change.

Cavazos’ father and Anzaldua’s mother were brother and sister and the cousins grew up together in the 1960s. The family isn’t making a ton of money from the property, but it’s enough to pay bills and taxes.

These days, Cavazos doesn’t even know if his family will have direct access to their land on the river.  “One thing that they told us is that we might get a gate,” Cavazos said. “They kept saying, ‘We don’t know where they’re going to go. The only thing we can tell you is that they’re going to put a gate every mile,’” Fred said. “Today they told us that we we might get a gate but we’re not too sure about it because, apparently, it’s $2 million to build each gate.”

Cavazos and Anzaldua don’t want the wall to cut through their property but they’re reduced to hoping for a miracle as bulldozers are scheduled to start clearing land in this part of Texas.

“There’s not crisis here as Donald Trump says,” Anzaldua said. “A wall is not needed and should not be a priority.”