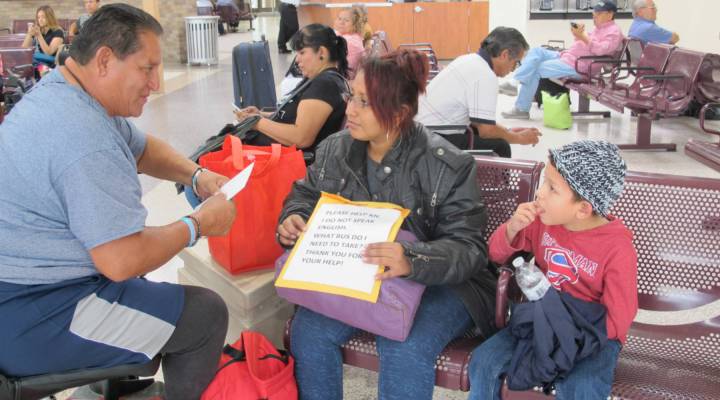 COPY
Since Nemesis Aparicio does not speak English, volunteers at the bus station gave her a sign to ask people along her journey to help her make the right bus transfers. Kimberly Adams/Marketplace

Since Nemesis Aparicio does not speak English, volunteers at the bus station gave her a sign to ask people along her journey to help her make the right bus transfers. Kimberly Adams/Marketplace
Listen Now

After a drop in arrivals last fiscal year, there was a spike in families and unaccompanied kids crossing the U.S.-Mexico border from October to March.

One of those families was Nemesis Aparicio and her 8-year-old son, Edenilson Antonio. They were detained for a few days after illegally crossing the border this spring.

“We crossed on rafts and came with 10 other people, mostly minors,” she said.

After they were released from a detention center, they went to the Sacred Heart Catholic Church in McAllen, Texas, where they searched through neat stacks of donated clothes. Like many who illegally cross the border in the area, she came with pretty much nothing, and the pair were preparing for a long bus ride Virginia, where they have some family.

“My sisters… sent me money to buy the [bus] tickets but don’t have money to buy me clothes,” she said as she examined a pair of pants and some small shoes she thought might fit her son. He was on the hunt for a Spider-Man shirt to go along with the Superman shirt he was wearing.

Aparicio said they left their home in El Salvador because of domestic abuse and rampant gang violence. Along the U.S.-Mexico border, apprehensions of children and their families have more than doubled compared to the previous year in the first quarter of the fiscal year, although the numbers abated a bit in the spring.

Nemesis Aparicio and Edenilson Antonio prepare to leave the tent accommodations outside the Sacred Heart church with donated clothes and toiletries.

“One important thing to keep in mind is that factors that are causing people to take this long and really difficult journey haven’t changed in the last several years,” said Jens Manuel Krogstad of the Pew Research Center. He analyzed data from Customs and Border Protection, which showed a drop in arrivals last year. But this year, the early numbers look more like those leading up to the summer of 2014. That’s when a wave of mostly unaccompanied children migrated north. This time around, though, the spike was more visible with children and families.

“If those drivers—the poverty and gang violence — continue in their home countries, then it’s reasonable to think that more people will continue to take that trip north,” he said.

The Department of Health and Human Services asked Congress for hundreds of millions of dollars in extra funding to care for minors as they arrive. Meanwhile, the U.S. is spending about $750 million to help stabilize El Salvador, Guatemala and Honduras, with the hope if things improve in those countries, maybe fewer people will try to make the dangerous trip.