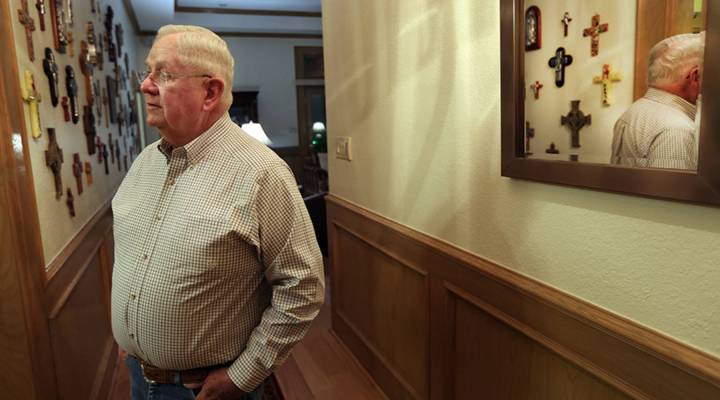 Rancher Richard Guerra stands in a hallway in his McAllen, Texas home on Wednesday, Jan. 30, 2019.  Guerra supports a border wall as a way to help prevent fever tick-carrying animals from crossing into Texas from Mexico. Filipa Rodrigues/Marketplace
Business on the Texas-Mexico border

Rancher Richard Guerra stands in a hallway in his McAllen, Texas home on Wednesday, Jan. 30, 2019.  Guerra supports a border wall as a way to help prevent fever tick-carrying animals from crossing into Texas from Mexico. Filipa Rodrigues/Marketplace

Editor’s note: Marketplace’s Andy Uhler is spending the week reporting about doing business on the Texas-Mexico border, during a time of intense debate over U.S. immigration policy and a push by President Donald Trump to build a border wall. Uhler is sharing some small stories along the way. Below is the third entry from his reporter’s notebook. You can read the other entries here.

McALLEN, TEXAS – If you’re not in the cattle business, you probably don’t think a ton about fever ticks. But if you’re a South Texas rancher, you worry all the time about a disease transmitted by ticks, bovine babesiosis.

Some ranchers, like Richard Guerra, think one key to controlling the disease is to stop animals from crossing into Texas from Mexico, where the ticks are endemic.

Guerra’s family has owned 9,000 acres of land in Roma, Texas, for hundreds of years. He and his son invited me into their home in McAllen to chat about the fever tick problem — and why they think a border wall or other physical barrier would help.

“Our view is very simple: If we have a barrier to stop cattle, horses, wildlife from coming across (the border), we’re gonna have a better chance,” Guerra said. “We’re not going to stop the humans, I don’t care what kind of wall we build, but I want a wall.”

Guerra, who met Donald Trump on the president’s recent visit to the area, stopped raising cattle in 2015 because it became too expensive to control fever ticks.

“My economy is ranching,” the elder Guerra said sitting across from me at his kitchen table. “That’s my business. I make my money off the cattle business when I have cattle. But when I don’t have cattle, like right now, it’s because of the fever tick. And that means I’m operating at a loss.”

These days, there’s a nearly 400-mile fever tick quarantine buffer zone along the border, from the Gulf of Mexico near Brownsville to Amistad Dam north of Del Rio. In this zone, USDA experts called “tick riders” patrol the border on horseback to inspect livestock, including any stray cattle coming across the Rio Grande. If a tick rider finds a fever tick in your herd, you have to go through a long, costly process of dipping or spraying your cattle until the ticks are gone. And the USDA is going to be back every 14 days to check whether the ticks are really gone.

Rancher Jody Guerra sits a table in his father’s McAllen, Texas home on Wednesday, Jan. 30, 2019.  Like Richard Guerra, he supports a border wall for what he says are economic, not political, reasons.

Richard’s son, Jody, helps his dad run the ranch and agrees that a wall or any kind of physical barrier will help the Guerras get back to making money running cattle on their ranch.

“For us it’s more from an agriculture point of view,” he said. “It’s not about politics.”

Some on the border argue that the fever ticks are already in Texas and a physical barrier along the Rio Grande won’t do anything to fix the problem. But Jody Guerra argues that those folks don’t understand what ranchers are up against.

“There’s a real issue that’s going on down there,” he said. “It’s too much of an economic burden. So, you talk about an economic loss, it’s huge.”

The proposed border wall would also cut through a number of conservation areas, prompting more than 2,500 scientists to sign a paper warning that a wall would cause serious harm to both plants and animals, negatively impacting biodiversity in the area. One scientist who signed that paper, though, told me that some kind of barrier would help ranchers.