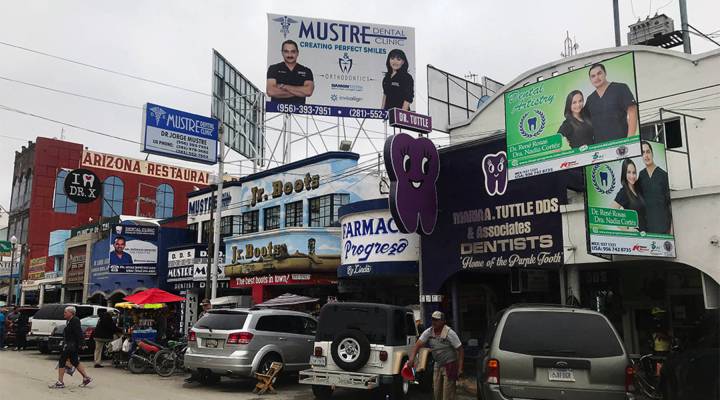 Texans travel from all over the state for the cheap and fast dental work in Nuevo Progreso, Mexico, shown here on Feb. 1, 2019. Filipa Rodrigues/Marketplace
Business on the Texas-Mexico border

Texans travel from all over the state for the cheap and fast dental work in Nuevo Progreso, Mexico, shown here on Feb. 1, 2019. Filipa Rodrigues/Marketplace

Editor’s note: Marketplace’s Andy Uhler spent a week reporting about doing business on the Texas-Mexico border during a time of intense debate over U.S. immigration policy and the push by President Donald Trump to build a border wall. Below is the ninth and final entry from his reporter’s notebook. You can read all of the other entries here.

NUEVO PROGRESO, Mexico – Over a couple of margaritas in a cabrito restaurant in this border town just south of McAllen, Texas, Amanda Rodas and Mike French discussed their plans for the day. The co-workers made the five-hour trip from Bastrop, Texas.

“I have to have two root canals and a crown,” Rodas said. She was getting her teeth fixed at a dentist next to the restaurant. The price: $350.

“I don’t have dental insurance and I know this is going to cost thousands of dollars back home to get something like that done,” she said. French is the one who told Rodas about getting dental work done in Mexico. He’s been coming to Nuevo Progreso for years. For decades, he was self-employed in the trucking industry and needed a lot of work done when he retired.

Mike Meek, a dentist in Austin, Texas, says sometimes people go for dental work in Mexico and then see him to correct mistakes. “They went looking for a deal and now they don’t have anybody to take care of them, and they seem to resent the idea that they’ve got to pay here in the States to have care,” he said.

French, though, trusts his Mexican dentist. “Oh, yeah. I mean he’s the best I’ve ever been to,” he said.

Maria Howell, a dentist in San Antonio, Texas, comes from a family of dentists. Her aunt and uncle practice in Mexico and see a lot of patients from the U.S. “So many people think that it’s new, and it’s not,” she said. “I’m 60-plus years old and it’s all I’ve ever known.”

Howell is also a spokesperson for the American Dental Association. She doesn’t think there’s a competition between American dentists and their counterparts in Mexico, but she warns that dental tourism has a downside. “When you’re trying to conserve expenses, sometimes it doesn’t work out because you have to travel and if you have complications, do you have to travel back to have that looked at and cared for?”