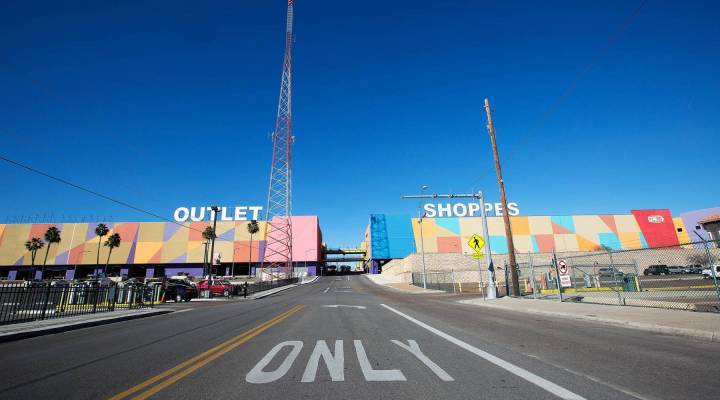 COPY
People driving across the border from Nuevo Laredo, Mexico are greeted by a massive outlet mall, Outlet Shoppes at Laredo in Laredo, Texas, that sells everything from sneakers and T-shirts to kitchenware and iPhones, shown here on Monday, Jan. 28, 2019. Filipa Rodrigues for Marketplace
Business on the Texas-Mexico border

People driving across the border from Nuevo Laredo, Mexico are greeted by a massive outlet mall, Outlet Shoppes at Laredo in Laredo, Texas, that sells everything from sneakers and T-shirts to kitchenware and iPhones, shown here on Monday, Jan. 28, 2019. Filipa Rodrigues for Marketplace
Listen Now

Editor’s note: Marketplace’s Andy Uhler spent a week reporting about doing business on the Texas-Mexico border during a time of intense debate over U.S. immigration policy and a push by President Donald Trump to build a border wall. Uhler is sharing some small stories along the way. Below is the first entry from his reporter’s notebook. You can read the other entries here.

LAREDO, Texas — Around three years ago, the Horizon Group built a massive outlet mall, the Outlet Shoppes at Laredo, on the American side of the Rio Grande. The mall, with more than 50 stores, is a short walk from the border between Laredo, Texas, and Nuevo Laredo, Mexico. Car and pedestrian bridges funnel Mexican shoppers to the outlet stores, which sell brands like H&M, Nike and Puma. There are signs on both sides of the motorway, in both directions, urging shoppers to visit.

“Eighty-five percent is Mexican,” said Adriana Reyes, the store manager at Journeys shoe and apparel store. “It’s mostly people coming from across the border, coming to save money.”

Reyes said in Laredo, where she grew up, most people don’t think about the border as much more than an inconvenient passport check. She crosses to Nuevo Laredo often.

“I’ll take my mom to go across to get groceries because it’s cheaper,” she said. “And to them [Mexicans], they come over here because things on this side are cheaper for them. It feels like an equal trade. We help each other out.”

Adriana Reyes, manager of Journeys shoe and apparel store in the Outlet Shoppes at Laredo, in Laredo, Texas, shown here behind the shoe store’s counter on Monday, Jan. 28, 2019.  Reyes says most of her customers are from the Mexican side of the border, who shop at the outlet mall and return the same day.

Several shoppers I talked to said they buy goods at the outlet mall, mostly things like electronics and brand-name clothes, then turn around and resell them in Nuevo Laredo at a profit.

Reyes said her store’s sales were up 50 percent in December compared to a year earlier, and she doesn’t think most people in Laredo are feeling the effects of heated rhetoric over Trump’s wall.

By the way, Laredo is the largest commercial crossing from Mexico into Texas. U.S. Customs and Border Protection employs nearly 2,000 customs field officers and more than 1,700 border patrol agents in the Laredo area.