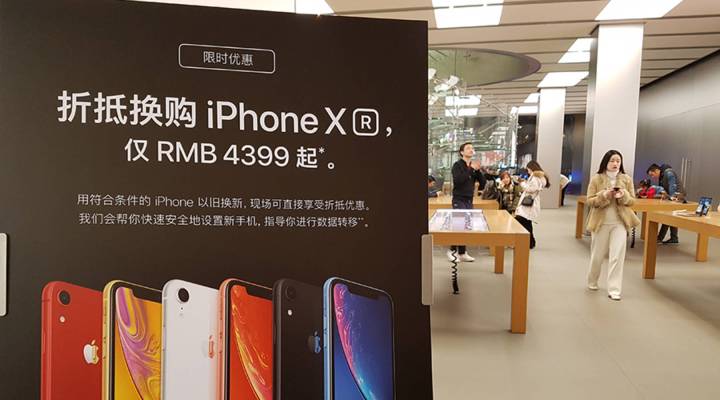 COPY
An Apple store in Shanghai offers customers a discount on the new iPhone XR model if they trade in an older iPhone model. Jennifer Pak/Marketplace

An Apple store in Shanghai offers customers a discount on the new iPhone XR model if they trade in an older iPhone model. Jennifer Pak/Marketplace
Listen Now

CEO Tim Cook blamed it on the slowing Chinese economy, but not all analysts agree with his assessment.

“Apple sales are down, but this does not reflect weak consumer spending [in China],” said Nicholas Lardy of the Peterson Institute for International Economics and author of the upcoming book “The State Strikes Back: The End of Economic Reform in China?”

He said Apple’s problems in the Chinese market were a result of “overly aggressive” pricing of its iPhones and tech improvement by China’s Huawei that make its handsets “superior to Apple at a much lower price.”

According to research firm IDC, iPhone shipments slipped by 12.5 percent in China in the second quarter of 2018 from the previous year, leaving it in fifth place behind Chinese brands like Huawei and Oppo.

Marketplace spoke to some Apple fans in China to see if they were falling out of love with the U.S. brand.

Wang is a social media influencer and tech commentator.

Number of Apple products on hand: Twenty, five of which are used daily. He keeps the first generation in each Apple product category.

“The experience on the iPhone didn’t exceed my expectations, and the price is much higher than Chinese brands like Huawei’s Mate 20 model, which has better features for Chinese users,” Wang said.

Why he thinks iPhone sales have declined in China: IPhones have a high price tag, but the user experience is not as good as cheaper Chinese brands; Apple’s customer service is “terrible,” and the concept of making an appointment online before seeing a support staff member “doesn’t fit Chinese habits”; features such as allowing users to draw directly on photos without a third-party app and personalizing emojis were available on Chinese handsets before Apple offered these functions on its iPhones.

On Apple’s Chinese market: Apple CEO Tim Cook has said previously that the firm respects China and that its consumers are a priority. “To be honest, I didn’t feel Apple respects China’s market from its marketing activities,” Wang said. “Many iPhones were not launched in China first, they were sold in the U.S. or Hong Kong. Now the phones are released at the same time in China, but what about localizing some features? They don’t have many. Apple seems to respect our money, but does it respect our culture or our use habits? No!”

Still an Apple fan? “In my opinion, Apple is still the best company in business history,” Wang said. “It has the highest market value and the best aesthetic taste.” However, recent Apple products have not impressed him. So Wang said he is not as loyal to the brand.

Schwankert is a Beijing-based writer who covered the arrival of the iPhone in China and identifies as a lifelong Apple lover.

On the iPhone’s arrival in China in 2007: “It may be one of the most amazing product launches in history because the product was not actually launched [in China],” he said. “Yet the company later traced that there were approximately a million iPhones in China.”

How? Through phones bought in Hong Kong or the United States and then resold on the Chinese mainland. Schwankert received the first iPhone model as a gift from a friend who asked another person to buy it in the United States. Since the iPhones were locked to the AT&T system, he had to have it manipulated or “jail broken” to use with China’s mobile carriers.

“You basically had to take [the iPhone] to the college kid down the street, who would hook [the iPhone] up to a machine and install some software, and that would essentially override the safeguards that made the phone use the AT&T system,” he said.

He said the iPhone is still an “iconic product” in China’s biggest cities, but perhaps it doesn’t have quite as strong an identity in the middle of the country.

Despite the sliding sale figures, Schwankert believes Apple is still leading the trend in China.

“Apple must be doing something right because all the competitors seem to be producing almost the same product but with a different name at a different price point.”

Xing is a restaurant worker in Shanghai.

Have you considered any smartphones other than Apple? No. “Recently, people have said that buying Huawei phones is patriotic, but the core technology in Huawei products is not that different from other [Android] phones,” he said. He believes Android systems are more prone to malware, so he is sticking with Apple products.

Electronics markets are part of the gray market where some vendors obtain iPhones from places like the U.S. and Hong Kong and sell them at a price below local cost.

Wang (who doesn’t want to use his full name for fear of government retaliation) is a driver on the Didi ride-share platform in Shanghai.

How he obtained his iPhone: His wife asked someone to buy it in Australia and brought it back to China because it is cheaper.

Why iPhone? Wang has used Android smartphones, but he believes the iPhone has better performance than Chinese handsets. While his wife and teenage child in Shanghai use iPhones, people in his native Jiangsu province don’t.

“They’re too expensive [for people there].”

If his iPhone breaks down, he said he will buy a replacement because Apple products are a status symbol.

“Buying an iPhone is like buying a car. You have China-made cars and imported ones. People only care what brand you choose.”

For him, the iPhone is the Mercedes-Benz of cellphones.