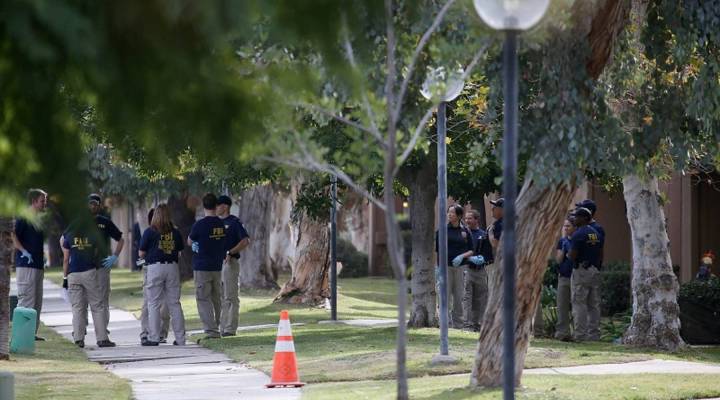 COPY
Apple will fight an order to unlock the phone of a San Bernardino gunman. Above, investigators searched the home of Syed Farook, one of the shooters, on December 3.  Photo by Justin Sullivan/Getty Images

Apple will fight an order to unlock the phone of a San Bernardino gunman. Above, investigators searched the home of Syed Farook, one of the shooters, on December 3.  Photo by Justin Sullivan/Getty Images
Listen Now

Today Apple announced it would fight back against a federal court order that rules the company has to help unlock an iPhone used by one of the shooters in the San Bernardino shooting last December.

Magistrate Judge Sheri Pym of the Federal District Court of the District of Central California has ordered Apple to build a special software that bypasses security functions on the iPhone and unlock it.

Apple is resisting the order, stating it wants to protect customers’ privacy.

According to Marketplace senior tech correspondent Molly Wood, investigators worry that if they try to enter possible security codes into the iPhone too many times, that will cause the iPhone to permanently erase all of its data.

“What [the investigators] want Apple to do basically is to write software that will bypass that security feature [that erases all the data],” Wood said. “So they can keep trying passwords all the live-long day until they eventually unlock the phone.”

Part of Apple’s mission is to maintain the trust it has has with their consumers, according to Wood.

“They don’t want to be AT&T who helped the NSA spy on millions,” Wood said. “Or Yahoo, who helped jail a Chinese dissident. They want to say, ‘You can trust us to protect your information.'”

Another issue is what legal precedent this situation could set, Wood said. Apple’s big concern is that if it unlocks this iPhone, other countries like China and Russia wouldn’t be afraid to ask the company to unlock other phones in the future.