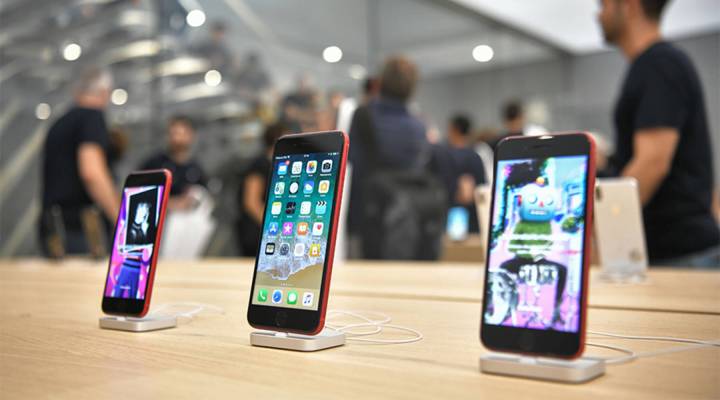 Apple released its earnings Tuesday afternoon, and although it met its lowered expectations, revenue from iPhones was down 15 percent over the same quarter last year, and the future trend is still down. For years, Apple’s smartphone strategy has been to make premium devices with a premium price tag. The starting price is basically $1,000 for a new flagship iPhone. But those prices are hard to swallow in China and India, markets Apple is depending on to grow its global market share. Even here in the United States, consumers aren’t upgrading their phones as much as they used to. Molly Wood talks with Julie Ask, principal analyst at Forrester Research, about how Apple can keep commanding such high prices. The following is an edited transcript of their conversation.

Julie Ask: [Apple has] relied on a very affluent base of consumers in the past that can afford to buy not only devices but services and subscriptions within the ecosystem. I think one of the things that is hard to tell and I think one of the things they’re not going to tell us is: Is it inhibiting their ability to attract new consumers into the ecosystem?

Molly Wood: It’s interesting because it feels like it was a strategy based on an old economic model of ongoing recovery where, if you tie it to the broader economy, it was based on the idea that there’d be an economic recovery, and wages would continue to go up, and there’d be lots of consumer spending, and we’re kind of not seeing that.

Ask: Yeah, so we’re not seeing that, and I think if you look at the opportunities for growth, it’s either get the same people to upgrade faster or it’s attract new consumers into your market. And you look at who those new consumers are and they’re simply not as affluent or as wealthy as the existing base. They’re either young or they’re living in markets where there’s lower wages overall. I think the trouble with these large consumer electronics companies is the smartphone came along at this time, and it’s been an amazing, amazing 10- to 15-year ride at this point, but there isn’t another “it” device that’s coming after it that’s going to make up for the revenue with the slower replacement cycles and the slower uptake from consumers in the market today.

Wood: So what do you think comes next? Some manufacturers are sort of bucking this trend. OnePlus is going with a cheaper phone. Is that overly simplistic as an answer or would cheaper phones help sell more phones?

Ask: If I were a smartphone manufacturer, I would test the market with less expensive devices. I say that based on someone who studies consumer behavior. The devices that are selling now in the market for $1,000, $1,100, $1,200 are amazing for photography and playing video games and watching TV, and when we see 5G come out, it’s going to be awesome. That said, the vast majority of the activity that consumers are doing on these phones is still around communication, instant messaging, texting my friends, triaging email for work, and I don’t need the latest, greatest device to do that. So I think it is reasonable to expect that consumers will say, “Hey, how do I really use this device, and do I really need something that costs $1,000 to $1,200 to triage my email?”