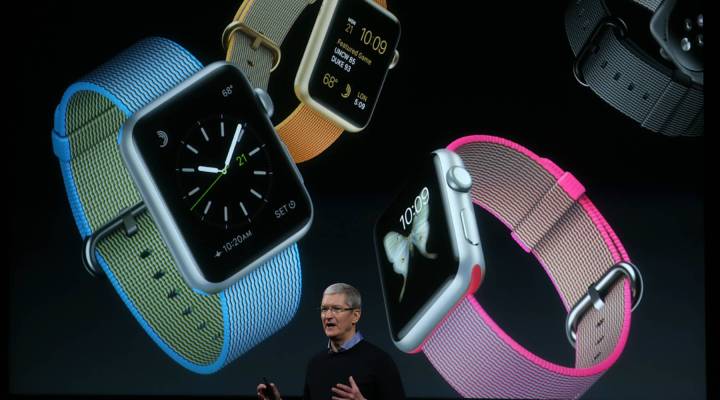 COPY
Apple CEO Tim Cook speaks about the Apple Watch during an Apple event back in March at the company's headquarters. Justin Sullivan/Getty Images

Apple CEO Tim Cook speaks about the Apple Watch during an Apple event back in March at the company's headquarters. Justin Sullivan/Getty Images
Listen Now

Apple has reported its latest profits to much fanfare, and results show iPhone sales have once again slumped, with overall sales down by the billions from this time last year. Still, stocks shot up because the results were better than expected.

To hear Apple CEO Tim Cook talk on the earnings call Tuesday, everything is rose golden.

“Apple Watch continues to be the best-selling smart watch in the world,” he said.

Profits were at $7.8 billion for the quarter, compared to $10.7 billion during the same three months of 2015. Comparatively weak iPhone sales were offset by an uptick in the iPad’s growth; Cook said more people are purchasing those for work. And revenues were strong in Apple’s service areas, including iCloud and Apple Pay.

But the 40 million iPhones Apple shipped out was still a drop from this time last year.

“It’s hard to keep growing and growing and growing off the basis of one single product,” said J.P. Gownder, a VP and principal analyst at Forrester. The Apple Watch hasn’t exactly been a smash hit, so Apple’s been aggressively trying to grow in new parts of the world instead.

Anindya Ghose, a business professor at the NYU Stern School, has been following Apple in China and in India, where Apple’s sales growth was strong this quarter.

He said Apple will start opening retail stores in India soon. On the other hand, sales in China have slowed, but much of that can be attributed to an overall slowdown in the Chinese economy.