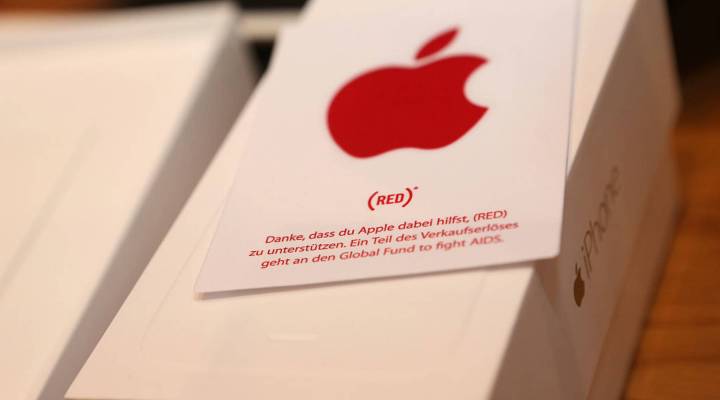 Apple’s new iPhone 7 — a distinctly colored red iPhone — is on sale today. The newest iPhone is a collaboration between Apple and Bono’s (RED) Campaign, but while the phone is connected to a charitable cause, it may also mean a bump in sales.

“To be honest, when consumers walk into one of the carriers, they won’t probably even be aware that the initiative is going on,” said Angelo Zino, senior equity analyst at CFRA research. About 90 percent of iPhones are sold through the carriers, he said. Apple has previously seen a boost in demand when it rolled out iPhone in jet-black and rose colors. “This is just the next step of Apple looking to extend the color options for consumers.”

The latest version of the iPhone now comes in six colors — red, black, jet black, gold, rose and white. However, only higher-memory phones come in red, which could potentially limit sales, Zino said.

The (RED) campaign raises funds to fight HIV/AIDS and is a division of the ONE campaign, which was also co-founded by the U2 frontman. It was launched in 2006 with Apple, Motorola and Gap as its corporate partners. The height of the campaign’s popularity was marked with a “Do the (RED) Thing” line of Gap T-shirts launched to mark World AIDS Day that year. The shirts were emblazoned with words such as discove(red), empowe(red) and ado(red).

Apple’s 10-year-long collaboration with the campaign has been more subtle, lacking the obvious (red) branding. Instead, Apple sells products in a deep red color, donating a portion of the sales to the campaign. The products include nano and shuffle iPods, Beats headphones and speaker, and an Apple Watch.

Typically, Apple donates a majority of the funds raised by the campaign to the Global Fund, according to the company, with the exception of those used for administrative expenses.

Gene Munster, managing partner at Loup Ventures, said he expects Apple to sell between 12 million to 24 million red iPhones in the next year — that will account for 5 percent to 10 percent of the iPhones sold. But, he said, the new color is probably not about driving sales.

“Apple released the red iPhone to genuinely give back,” he explained. “The color red is not strong enough to measurably increase demand. And they need to do it infrequently to maintain product red’s appeal.” For example, when it first partnered with the (RED) campaign in 2006, Apple launched a limited-edition red nano iPod.

Proceeds from Apple’s (RED) products and promotions account for 28 percent of the funds raised by the campaign.

“(RED) has generated more than $465 million for the Global Fund, with more than $130 million from Apple alone,” according to Tuesday’s press release.

The global aid organizations supported by (RED) funding efforts have a complicated history and have drawn scrutiny for over five years due to allegations of fraud and corruption.

The (RED) campaign itself drew criticism one year after launching for spending more on advertising than it raised. A year later, the New York Times reported that the funds raised by (RED) allowed the Global Fund to shift funds to other programs and to increase its visibility. Then in 2011, the fund’s internal inspector general’s office uncovered corruption, including drugs sold on the black market, forged documents and improper bookkeeping practices. In response, the fund pulled or suspended grants from nations where corruption was found. Most recently, in April 2016, the U.S. Senate launched an inquiry into the fund’s anti-corruption practices and the firing of the inspector general who published the reports alleging corruption.

Despite the corruption allegations, Munster sees Apple’s association with the Global Fund as a plus.

“It benefits Apple to work with the Global Fund. Tim Cook has shown that he cares about the betterment of people, and we believe his participation in the Global Fund is genuine,” Munster said. “There is no doubt that Apple does its homework on the Global Fund and views it as a good partner.”