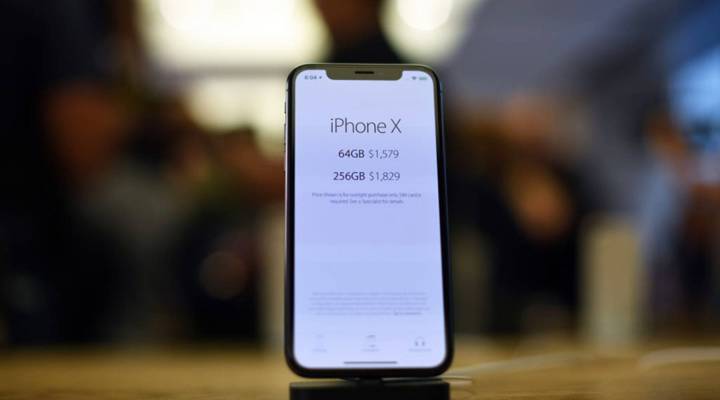 New iPhone X sits on a dock at an Apple showroom in Sydney on November 3, 2017 SAEED KHAN/AFP/Getty Images
Listen Now

Apple released its latest earnings report on Thursday and the numbers were above expectations. Revenue is up 12 percent from the same quarter last year, making the iPhone 8 and 8 Plus the company’s best-seller. Those numbers are expected to rise with the release of the iPhone X today. While Apple is a major player in the U.S., it also needs China to continue to grow.

In the U.S., the phone market is dominated by Apple and Android. But Apple needs China to continue to grow. In China, Apple has other competitors. Marketplace Tech host Molly Wood talked about it with Jennifer Pak, our China correspondent. Below is an edited excerpt of their conversation.

Molly Wood: How do you think the iPhone X will fare in China?

Jennifer Pak: Well, reporters say that there’s less demand because these iPhones are getting so expensive. You’re talking about people having to lay at least two months of their salaries just to buy this phone.

Wood: Is there the kind of brand obsession with Apple? I have heard reports of that being true in the past in China. Is that still as strong, do you think?

Pak: I think it still is very strong, simply because there’s a certain image that comes with it, for nothing more than the fact that you can afford something so expensive. So when you first started seeing smartphones 10 years ago, they sorta started looking like the iPhone. And the joke was, “Oh, is that real?” And even today, if you walk through the electronic markets in Shenzhen where most of your electronics really come from, they will sell these cases that sometimes have the Apple logo at the back just to make your phone look like it’s an iPhone.

Wood: You’ve also talked about how there’s a value to something like an iPhone in China because it’s a real phone. Can you tell me about that?

Pak: A real phone as in you can depend on the fact that it can work. When you’re living in China, there are many things that you can buy, but you’re never quite sure, whether you’re online or in the shops, is this really real?

Wood: Do you then find there’s a suspicion of all phones? Like if you buy an iPhone and it just doesn’t work very well — because, whatever, the new software update isn’t so good — do you find yourself with this lack of trust, thinking, “What if I accidentally bought a fake phone?”

Wood: Yeah, it was copy-paste. The first iPhones came out, and you could not copy or paste. It was a missing feature.

Pak: And I remember that there were these reports that people bought these fake iPhones and they corrected that problem already.

Wood: Wow, so if you bought a fake one, it would be better?

Pak: Sometimes, sometimes. That’s what I’m saying. And there was a word that was born out of this and for a long time it meant poorly made counterfeits. But actually, the whole industry — and because China produces most of these electronic devices for the rest of the world — it got better and at a much faster pace.