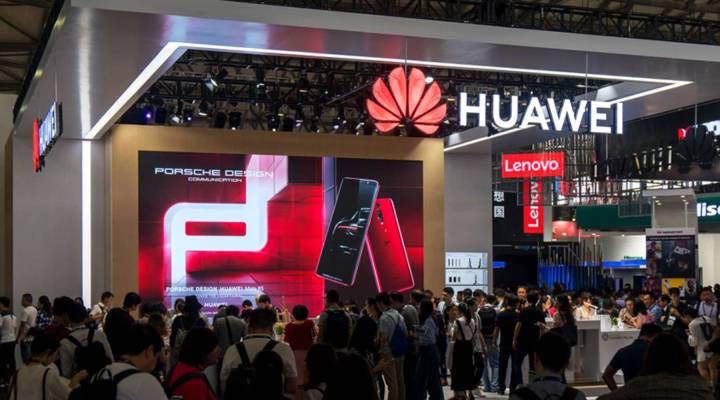 People gather at a Huawei stand during the Consumer Electronics Show Asia in Shanghai on June 13. AFP/Getty Images
Listen Now

The Trump administration this week decided against the hard trade restrictions it had been considering against China, but it’s still planning on new tariffs on Chinese goods. Starting next month, Treasury Secretary Steve Mnuchin made it clear the government would aggressively protect the U.S. tech industry. Meanwhile, China is working on building up its own advanced tech economy, one that doesn’t rely on the United States or anyone else. Marketplace’s Molly Wood talks with our China correspondent Jennifer Pak, about the Chinese government’s tech initiative called Made in China 2025. The following is an edited transcript of their conversation.

Jennifer Pak: Well, this is Beijing’s plan since 2015 to dominate cutting edge technologies, such as advanced microchips, artificial intelligence, electric cars, biomedicine. In total, it’s going to focus on 10 sectors. Now the reason is, China is very good at manufacturing products. Look at the iPhone. But it relies on a lot of foreign imports, including America for its core technology. And China aims to make 40 percent of the so-called core components in finished high-tech products by 2020. But eventually, this policy is about self-sufficiency.

Molly Wood: When you say it’s “Beijing’s plan,” you mean that it’s government financed? Like the government is helping finance companies who are working on these technologies?

Pak: It’s not explicitly written so. What it says is that it’s “supporting” it. Now this support can come in a number of ways. It could be financial, but more importantly, foreign companies here complain that it’s about regulatory issues, they have administrative red tape. That could all be lifted if it is in line with the national strategy.

Wood: I mean, how effective is this? It’s been described as when the Chinese government says something’s going to happen, for example [reducing] air pollution, it happens. Do you think that countries like the U.S. have a right to be worried that the government is so strongly supporting such specific initiatives?

Pak: I think there are legitimate concerns. Of course, as you mentioned, China’s government has a lot of control over the economy, the media, state-owned companies. So when it sets its mind to something, it’s very effective. But at the same time as you can see, in a lot of the sectors, it’s quite far behind, and some analysts say there’s nothing wrong with China trying to set its sights higher, right? To not be the “factory of the world,” to produce its own core technologies. The problem is that right now, China is already protecting its strategic industries, forcing foreign companies to go into joint ventures, and really only releasing or opening up some of these sectors when domestic champions have dominated the field and making it, in some cases, foreign firms complain, they don’t even have an edge. They don’t have any room to get in.

Wood: How do people feel about Made in China 2025? That feels like the sort of initiative that people could really get behind and feel a lot of pride about. Is that fair?

Pak: Yeah, it’s definitely fair. People are very proud, of course, of companies like Huawei, Alibaba, they’re very proud of this. And yes, there’s a lot of public support, of course, for Made in China 2025 in the sense where, why not make it in China? Why not have it developed in China? People talk about China like it’s the factory of the world and that’s great, but to have that “Made in China” label is really something that they’re aspiring to. And they don’t really see this plan as being a huge threat to Western companies. In fact, a lot of manufacturers I spoke to said competition is good. That’s their bottom line. And some analysts I’ve spoken to have also agreed. They said if China is more competitive, that’s going to drive the rest of the world to be more competitive as well.