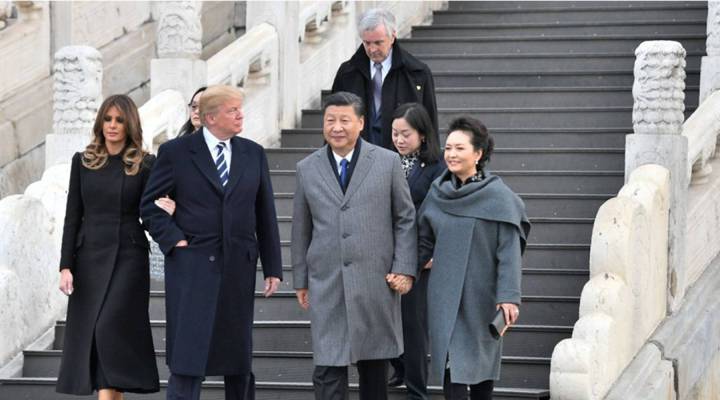 President Donald Trump is in China on the third stop of his Asian tour, meeting with Chinese President Xi Jinping. Along with the American president came a slew of American business executives, hoping to carve out a piece of the Chinese market. Marketplace host Kai Ryssdal talks with Marketplace China correspondent Jennifer Pak about what Trump’s visit means for both countries.

Ryssdal: The president ran, as you know, on bringing jobs back to the States. What’s this trip going to do for that?

Pak: Well, American businesses here say there’s been a huge misunderstanding that factory jobs lost in America were lost to Chinese workers. Well, in fact, they’ve been lost to machines. I spoke to the Chamber of Commerce president here in Shanghai, Ken Jarrett, and here’s how he explains it.

Ken Jarrett: In some ways, I think the hardest thing for people to understand is the successes of U.S. companies here actually help the U.S. economy back home. Now those jobs may not be manufacturing jobs, but they could be either marketing or product development, R&D, in fact, better paying jobs.

Pak: The other thing is that American consumers have been benefiting from this relationship between the two countries, because they get to buy cheaper goods that are made in China.

Pak: Well, Chinese businesses have been investing heavily in American technology and also American companies. So that’s possibly one way in which America can get some leverage. They can say, “Well, if China will not allow American companies to do something here in China, then they should not be allowed to do the same in the U.S.” This is reciprocity. And analysts say this negotiation really has to happen very quickly, because China has a very ambitious plan called “Made in China 2025.” It’s really a plan to upgrade the manufacturing, and they’re moving in almost every major sector of the future. They’ve already been very aggressive in artificial intelligence, also green technology. So American businesses here say that they need a level playing field.

Ryssdal: Before I let you go, we’ve seen on TV, of course, the president in the Forbidden City and walking around with President Xi. What’s it been like, say, on the streets of Shanghai today?

Pak: Honestly, here in Shanghai, I haven’t really seen much, but you’ve got videos of President Trump and the first lady visiting the forbidden palace. This is unprecedented, I suppose, for foreign dignitaries to be brought there on a state visit and the local media calls this “State Visit Plus.” So, President Trump and the first lady are getting first-class treatment here. Of course, the talks that are up ahead will be very tough for both sides.