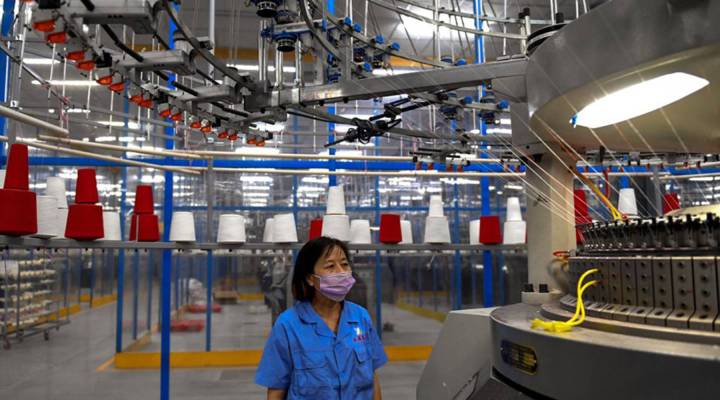 Automation is coming. And although it’s inevitably going to take jobs away, it’s also going to create millions of new jobs, make production more efficient and kickstart entire new industries. The countries that invest in automation early, and in the retraining that will help workers transition to new types of jobs, could really jump ahead economically. That’s partly why automation is a huge part of the Chinese government’s Made in China 2025 initiative. That’s the country’s plan to reduce its reliance on outside technology and create a tech economy that rivals the West. Automation is an especially big deal in China. There’s so much manufacturing there, it’s sometimes referred to as “the world’s factory.” Marketplace’s China correspondent Jennifer Pak joins host Molly Wood to talk about how big a deal the transition to automation might be for China. The following is an edited transcript of their conversation.

Jennifer Pak: There are some estimates that say that China’s [gross domestic product] will be boosted by 20 percent in 2030. Of course, that comes at a cost. An estimated one-fifth of China’s jobs in the manufacturing sector alone will be replaced by automation. So that’s nearly 100 million workers who will have to switch jobs by 2030.

Molly Wood: What about retraining? One of the things that we hear is that when there’s displacement, that there has to be retraining for people who are displaced by automation. Is there a sense that companies or even the government is going to help with that?

Pak: I haven’t heard of any comprehensive plan. China’s push has always been toward entrepreneurship, at least in the private sector. They’ve been encouraging people to venture out into the internet economy and make their own things. So a lot of the talk is what great things could automation and artificial intelligence do for our society? It can release you of these mundane jobs so that you can go and innovate.

Wood: So what solutions overall does China’s government have in terms of pushing automation forward?

Pak: Well, China’s government is not necessarily pushing for automation. It is, however, a focus more on high-tech manufacturing. That’s what they’re pushing for under this plan called Made in China 2025, which is at the center of this trade dispute with the U.S. So they are encouraging factories to use new technologies. Now, of course, the byproduct of that is automation. But remember this is coming at a time when China’s workforce is aging rapidly and a lot of the manufacturers we’ve been speaking to when we try to ask them about this trade dispute with the U.S., how worried they are, the first thing they talk about is not about that. They’re talking about how difficult it is to find a stable working force because a lot of the young people, they don’t want factory jobs. They are asking for less overtime, unlike their predecessors. They want weekends off, which is not a usual thing for Chinese factories. So a lot of these manufacturers are complaining that it is very tough for them to find workers. And so that’s why when we speak to some of these factories, they say automating is not so much about saving money, it’s a matter of survival.

Wood: Survival for the entire economy?

Pak: Well, survival for their own business. They can’t speak for the entire economy. But, for example, we spoke to a machine parts manufacturer from an eastern province. They currently have 250 workers on the factory floor. They plan to reduce their workforce by about 60 percent down to 100 workers in five years. The company says if they do not automate their production they may have to shut down. The interesting thing he added though is that there are downsides to industrial robots. Yes, these robots will not ask for holidays. They will not take a tea break, but they can break down, and he says sometimes that takes time to repair.

In case you missed it, here’s the tech news we’re thinking about: