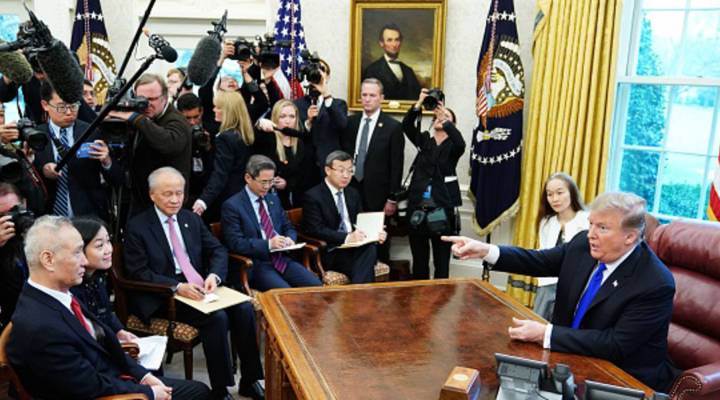 President Donald Trump said Sunday he will extend a deadline to escalate tariffs on Chinese imports, citing “substantial progress” in weekend talks between the two countries. Trump tweeted that there had been “productive talks” on some of the difficult issues dividing the U.S. and China, adding that “I will be delaying the U.S. increase in tariffs now scheduled for March 1.”

For more on the latest development, host Sabri Ben-Achour spoke with Jennifer Pak, Marketplace’s correspondent in Shanghai. Below is an edited transcript of their conversation.

Jennifer Pak: Well, at the end of this week, the U.S. was set to raise the tariffs on $200 billion worth of Chinese imports from 10 percent to 25 percent. Now there have been trade talks to avoid this. President Trump now says that the discussion with the Chinese has gone so well, he’s delaying this rise in tariffs until they sort out an agreement. Problem is, we don’t have any more details than that.

Sabri Ben-Achour: We know what the U.S. wants. We know they want to reduce the trade deficit, the president wants to stop intellectual property theft and forced tech transfers. Out of those, are there any clues where progress might have been made?

Pak: Well, China has said it is willing to buy more U.S. goods. And according to American officials, there was an agreement on currency issues, but again, no details. There are major hurdles, however, like the fact that China disagrees there even is a state-led effort to steal technology and force tech transfers from American firms. Lastly, how is the U.S. going to hold China accountable?

Ben-Achour: What should we and what should U.S. businesses operating in China take away from this? What does this mean?

Pak: Well, it’s basically a pause on escalating the trade dispute. But unlike the last pause in December, we don’t even have a timeline. So as it stands there are still tariffs and counter-tariffs on hundreds of billions of dollars on each other’s goods. For businesses caught in between, that just means continued uncertainty.