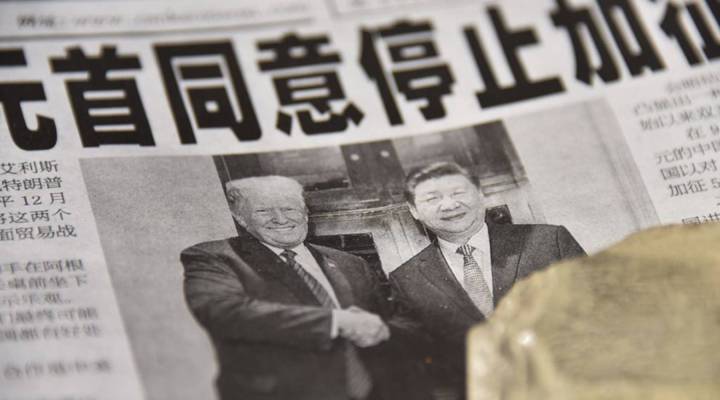 COPY
At a news stand in Beijing, a newspaper features a story about the meeting between U.S. President Donald Trump and Chinese President Xi Jinping. GREG BAKER/AFP/Getty Images
Trade showdown

At a news stand in Beijing, a newspaper features a story about the meeting between U.S. President Donald Trump and Chinese President Xi Jinping. GREG BAKER/AFP/Getty Images
Listen Now

An upcoming U.S. tariff hike on Chinese goods has been put on hold. President Donald Trump and China’s President Xi Jinping met at the G-20 summit in Buenos Aires, Argentina, last weekend where it was announced U.S. tariffs on Chinese imports will stay at 10 percent for 90 days while the two countries negotiate their trading relationship. Marketplace host Kai Ryssdal spoke with Shanghai correspondent Jennifer Pak about it. The following is an edited transcript of their conversation.

Kai Ryssdal: So you heard this announcement Friday-ish. What do you think?

Jennifer Pak: Well, it seems to not be so much a breakthrough as a pause. As I had been thinking, the Chinese had had very low expectations going into it, which was: Stop the tariffs on $200 billion worth of goods from going up to 25 percent. That to them was already very good because most of the businesses I’ve been talking to, they said 10 percent, for now, is bearable.

Ryssdal: So what happens over there, for the businesses that you’ve been covering, if it goes to 25? Because yes, they’ve got 90 days from January the first, but there’s a lot of stuff to work through to get that done.

Pak: Well, Chinese manufacturers I’ve been speaking to are not the ones sometimes directly selling to American consumers. So you have to understand that their profit margins are very small. They can’t be up to 25 percent. So they are scrambling. In some cases, they have absorbed some of that. They’ve passed some on to their suppliers in the U.S., but they don’t really know exactly what’s been happening on this end, whether American consumers have been bearing the brunt of it or not.

Ryssdal: Speaking of consumers, when you go out about in Shanghai and you’re getting a cup of coffee you’re having dinner or whatever — trade wars are economically top of mind over here. Over there?

Pak: Not really. Not in the state media. It’s been very much controlled, for good reason. In the past when China has an argument with another country, they have incited consumers to boycott and also tell people to stop going to visit their country. None of that has really happened right now only because the relationship is that important. Chinese officials want to make sure that both sides are on good terms so that they can negotiate. This is a face-saving measure both for the Chinese officials and also for the Trump administration.

Ryssdal: And as we know, it’s all about face over there. So a couple of specifics I want to run by you. First of all this car thing: The president tweeted out last night the Chinese are going to get rid of 40 percent tariffs on imported cars. What’s that all about?

Pak: I suppose it’s him trying to show that he’s going to arrive at a great deal with China.

Ryssdal: That part we got. But what’s really happening?

Pak: But in reality, not a lot of American cars that are being driven on the roads in Shanghai — and they’re very popular, by the way — they’re not being made in the U.S., they’re made in China.

Ryssdal: Buicks are all over the place, right?

Pak: Yeah, they’re everywhere. So actually, it’s just a way for them to say we’re approaching a good deal. But in terms of how it affects American businesses on the ground, it doesn’t really move that bar too high.

Ryssdal: Give me a sense of how tough the Chinese market is. Because what in essence the White House has promised is that in 90 days from January the first all of these structural impediments are going to be fixed. Do you buy that?

Pak: Not at all, because there are just too many impediments, there too many barriers. And in fact, right now there are written and unwritten rules when it comes to operating in China. And these are the things that American firms battle all the time. Sometimes things are changed, and they don’t even get informed of it. Chinese companies get word of it before they do, so they can’t react as fast.

Ryssdal: You’re going back in a couple of weeks?

Pak: I’m going to go back beginning of January.

Ryssdal: What do you think is going to be the vibe over there?

Pak: I think right now because the tariffs are hitting select industries and it’s definitely not being felt by consumers on both sides, right now it’s more about sentiment. But that matters a lot, right? Because people need to feel optimistic in order to want to invest more. And unfortunately for American firms, they have been holding back on increasing their investment because they’re not sure what’s going to happen.

Ryssdal: And because of these legitimate gripes the United States has, right, for technology transfer an intellectual property theft and all of that.

Pak: Yeah, but from the Chinese side, they don’t agree that these things are happening on a systemic level. Let’s put that out first. But that’s not the No. 1 concern for a lot of these companies. For example, when you’re talking about intellectual property theft, most companies, most American companies, when they go to China, the first thing they encounter is really trademark infringement or squatting. They would find that there’s somebody who had already registered their name there. So these are the more basic and fundamental barriers when they arrive, more so, I’m not saying the other ones are not a problem. These are select problems, but certainly it’s not going to be applied for all sectors and industries.