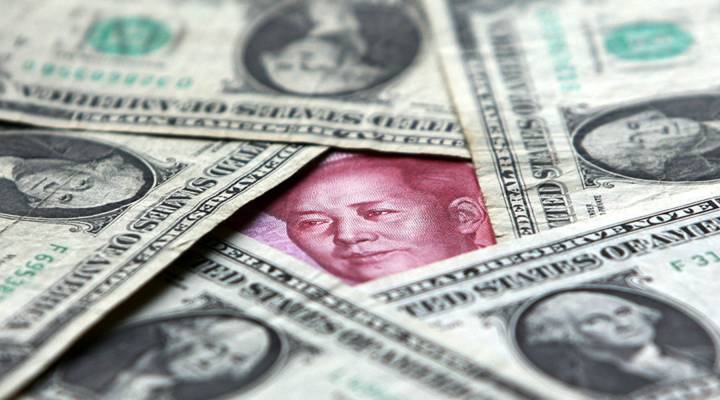 The 123rd Canton Fair is taking place in Guangzhou, China until May 5. One of the world’s largest import and export trade fairs, it takes place twice a year and is expected to draw close to 200,000 manufacturers in China and overseas buyers. Amid high trade tensions and proposed tariffs between the United States and China, business has to continue.

Marketplace asked importers and exporters on the ground in Guangzhou about how they’re feeling regarding the looming threat of tariffs.

Company: Canca Electronics is a TV manufacturer from southern China’s Chaozhou city that has produced items for American brands.

What is the impact on the firm? Huang believes the direct impact will be minimal since their business with the U.S. isn’t big, but she thinks the trade friction could increase the price of raw materials and make the U.S. dollar weaker against the Chinese yuan. Already the U.S. currency has been down 10 percent since President Donald Trump got into office.

Huang said these are excuses.

“[President Donald Trump] just wants to transfer problems in the U.S. economy to China and use China as a scapegoat,” Huang said.

She hopes the two sides will negotiate and find a resolution.

“Chinese people are united. We are hardworking. We are not afraid of a trade war. We wish for peace but if we are being bullied then we are not afraid. China will respond to each attack from the outside accordingly,” she said.

Gao Shiwang from the China Chamber of Commerce for Import and Export of Machinery and Electronic Products.

Company/Group: China Chamber of Commerce for Import and Export of Machinery and Electronic Products.

Are their products subject to potential U.S. tariffs? Gao Shiwang, director of the group’s industry development department, is still assessing the impact but he said some of its members who produce TVs and cables will be affected. The proposed list of tariffs doesn’t target the big items causing the trade deficit in the U.S., such as laptops and cell phones. Gao pointed out that many of these items are produced by U.S. companies, such as Apple and Hewlett-Packard.

Coping mechanism: Some Chinese companies have already moved their production bases to other countries such as Vietnam or Mexico, Gao said.

Intellectual property infringement does happen but Gao said the incidents occur between companies. He said there is no central government policy in China forcing foreign companies to transfer technology. Gao said a lot of the trade deficit in the U.S. is generated by American companies operating in China and exporting items home.

“The dispute of trade surplus or deficit between China and the U.S. is actually a product of the detailed division of labor in the global market. Both sides have benefited from this system and China didn’t have a huge advantage over the U.S.,” Gao said.

Company: Jinlong Machinery and Electronics is a company that produces mini motors from eastern Zhejiang province. The U.S. accounts for 20 percent of the manufacturer’s sales.

Are their products subject to potential U.S. tariffs? No.

What is the impact on the firm? Indirect. Candy Chen from Jinlong settles all businesses in U.S. dollars. The American currency has been weak and cutting into the firm’s profit margins, which she said were already sliding due to increased competition brought on by e-commerce.

Coping mechanism: Chen said her firm has always been cautious to only manufacture products after it receives an order, therefore reducing the risk of having unsold stock.

Chen doesn’t think there is such a thing as “fairness” in trade.

“It is just an excuse [by President Donald Trump] I think,” Chen said.

She believes government assistance to Chinese companies is normal and necessary because China is still developing.

It may be hard to believe with the skyscrapers in China’s mega cities such as Guangzhou. But Chen remembers growing up so poor that she had to split one apple into four pieces with her siblings.

“China is a big country. Only coastal areas in the east are well developed. There are many impoverished areas in the interior of the country. Many children from the mountains don’t have enough to eat and cannot go to school … People in China work like bees. We wake up early in the morning and go to sleep late at night and for what? We just want to earn money and feed our children,” Chen said.

Company: Shenzhen GIEC Electronic manufactures speakers with Amazon’s Alexa system embedded in it. The firm derived 25 percent of its revenue in 2017 from the U.S., sales manager Mr. Song said. He did not want to reveal his full name for fear of government retaliation.

Are their products subject to potential U.S. tariffs? No. His firm’s products are not high-end products the U.S. tariff list is targeting.

What if the firm’s products are subject to U.S. tariffs in the future?

“If it was five or six years ago I would be much more worried about fighting with the U.S. because there was no other big market for us. Now it’s different,” Song said. One of the fastest growing markets for the manufacturer is in Southeast Asia.

Coping mechanism: “If the U.S. doesn’t want to buy our products, we can just sell them to other countries,” Song said.

“I think the U.S. is afraid of China’s rise as a big power. The main reason for [the tariffs] is not related to trade,” Song said.

He likens the U.S. tariffs to how he deals with his clients.

“I may tell a client ‘If you don’t place an order today, I will raise the price tomorrow,’” Song said.

He said these are “tricks” used in business. While President Donald Trump is respected in China for his business acumen, Song doesn’t believe tariffs are the right tactic.

“As a statesman from the U.S., which is a superpower, [President Trump] should have a higher vision. If he only sees the relationship between China and the U.S. through the lens of a businessman, I am afraid he will lead America downhill,” Song said.