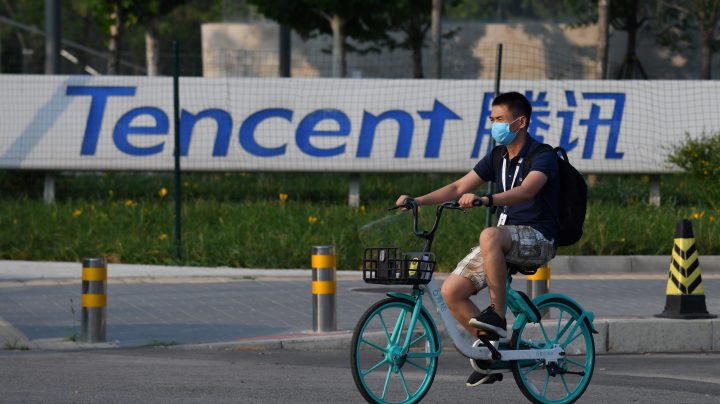 COPY
A man rides past the offices of Tencent, the parent company of Chinese social media platform WeChat, in Beijing. Greg Baker/AFP via Getty Images
TikTok

A man rides past the offices of Tencent, the parent company of Chinese social media platform WeChat, in Beijing. Greg Baker/AFP via Getty Images
Listen Now

In the latest sign of escalating tensions between the U.S. and China, President Donald Trump issued an executive order Thursday restricting the activities of Chinese social-media apps TikTok and WeChat.

TikTok is the first Chinese tech platform to gain massive popularity in the U.S., rivaling American platforms Instagram and Snapchat. WeChat is the unrivaled superapp that has become pivotal to daily life in China, widely used by Americans who have business or personal connections there. Both have built extensive audiences around the world.

Marketplace host Molly Wood spoke with our China correspondent, Jennifer Pak, about what this means for American tech companies competing for a global audience in the midst of an ongoing trade war. The following is an edited transcript of their conversation.

Molly Wood: So, give us a sense of how important WeChat, specifically, is as a tool for communication, but also for business.

Jennifer Pak: Well, in my life, it’s something I use every day. We call it the Swiss Army knife app. I can’t lay claim to that. But basically it does everything. So, I book taxis through it. I split bills with my friends, I communicate with my colleague, I have to send files to people, videos, pictures, everything is done on WeChat. It’s the app of everything, so it’s very important. And WeChat has a lot of functions, like if shops want to sell things or if they want to advertise when they want to communicate with consumers. Because remember, email is not widely used here. It’s seen as really ancient. So, for people who want to access the Chinese market, WeChat is it.

Wood: Let’s broaden out a little bit because of course, this Trump policy is an escalation that we expect to continue. What kind of chilling effect might this have on Chinese companies who are looking to expand into the United States?

Pak: Well, it’s already making people not go to the U.S. for now. Right? But we have to put this into context because the U.S. right now went from a very open-landscape, level playing field for anyone wanting to come in and invest, to now having some policies targeting Chinese firms. But at the same time, if you look at China, China is opening up, but there’s still many, many, many areas that are blocked for U.S. companies, and that’s part of the reason why the trade war started. So, it’s hard to kind of compare what’s been happening, but certainly, TikTok has been very vocal about it’s been very unfair. They have been trying very hard to play by America’s rules, but they said that this has nothing to do with law. It has nothing to do with the national security concerns and everything to do with just trying to shut TikTok out.

Wood: So, if this playing field, this very open investment playing field, continues to narrow, and Chinese companies don’t want to invest or cannot invest in American interests, where might that money go?

Pak: It’s already going to Southeast Asia, it’s going to developing markets. Because remember, a lot of times when people talk about this conflict between the U.S. and China, it’s really not about China and U.S. markets. It’s really about the next 4 billion customers, it’s about developing countries. So, we’re seeing a lot of the battles with e-commerce, especially Alibaba and Tencent, coming face-to-face with Google and Facebook in Southeast Asia, in India, in Africa. So really, the tension is going to be about the competition that American companies will face when they go abroad.