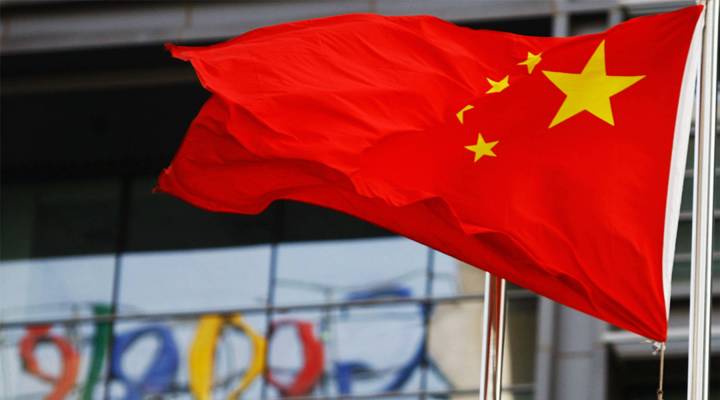 COPY
The Google logo is reflected in windows of the company's China head office as the Chinese national flag flies in Beijing in 2010. Li Xin/AFP/Getty Images

The Google logo is reflected in windows of the company's China head office as the Chinese national flag flies in Beijing in 2010. Li Xin/AFP/Getty Images
Listen Now

U.S. tech giants including Facebook, Google and Twitter are for the most part shut out of China. And ongoing trade talks between the two countries probably won’t lead to them being let in anytime soon.

China maintains strict control over speech — in books, movies and on news and social media sites.

A screenshot of the error message when trying to access Google News website within China versus what is available when using a virtual private network to access the same site. Messages like “This page can’t be displayed” are often a sign that the page has been blocked in China.

Attempting to load a foreign web site such as Google News can lead to a long wait before an error message appears.

Browser messages like “This page can’t be displayed” or “This site can’t be reached” are good indicators that the site is blocked in China.

Among the off-limits sites: most Google services; U.S. social media platforms; news sites including The New York Times, Bloomberg, The Wall Street Journal and even the South China Morning Post, which is owned by Chinese tech giant Alibaba.

Marketplace’s website loads fine in China, but the search function is turned off.

Most Chinese internet users do not notice the absence of U.S. tech giants because there are homegrown equivalents. Accessing Chinese domestic apps and sites is fast.

Instead of Google, China has Baidu map, Baidu translation and Baidu drive. Baidu Baike is the Chinese equivalent of Wikipedia. Instead of Facebook, Twitter and Instagram, China has Weibo and WeChat.

Rideshare app Didi Chuxing is often referred to as the “Uber of China.”

YouTube and Netflix are not available, but Chinese users can still watch their favorite shows — including U.S. TV series — and movies on Youku, iQiyi and Tencent Video.

Amazon has a weak presence in China, unlike competitors JD.com and Alibaba’s Taobao and Tmall platforms.

WeChat is the first app that most foreigners tend to download after they arrive in China. The app allows users to keep in touch, send documents to colleagues, order movie tickets, book cabs, split restaurant bills with friends, transfer money and pay utility bills.

However, what is said on WeChat — like the rest of China’s internet — is monitored by the government. And the censorship is becoming more sophisticated.

Superapp WeChat is used in China not only for daily communication but also to send files to colleagues, order movie tickets, split restaurant bills with friends, pay utility bills and book taxis.

Recently, Marketplace tried to send a GIF of a Chinese reporter rolling her eyes during a Communist party meeting. The intended recipient never received the message and Marketplace did not receive an error message indicating that the GIF was not sent.

Chinese internet users scratched out or rotated material about Taiwan’s independence and a letter detailing the detention of church members in order to avoid censorship by artificial intelligence and machine learning algorithms.

Those who want to move out from under the prying eyes of the Chinese government or access the internet outside of China subscribe to a virtual private networks. They mask the computer’s address and encrypt information.

Apple’s movie and book stores are empty in China because the services are not available there.

Finding the proper combination of VPN server and internet connection to make an online voice call can be time consuming.

Businesses with headquarters abroad have a more stable option: They can connect directly through a site-to-site VPN. However, since 2017, China’s government has banned unauthorized VPNs and is pushing businesses to use state-approved networks, which are pricey and don’t guarantee data security.

Despite all of this, some U.S. tech firms are thriving in China, including Microsoft and Apple.

But it hasn’t always been a smooth ride.

Apple has had to remove VPNs from its App Store and shift personal information for Chinese users to a data center run by a local partner. Its movie and book stores are inaccessible to Chinese users.

But playing by China’s rules gives those companies access to the country’s 829 million internet users. That’s around 2.5 times the population of the U.S.