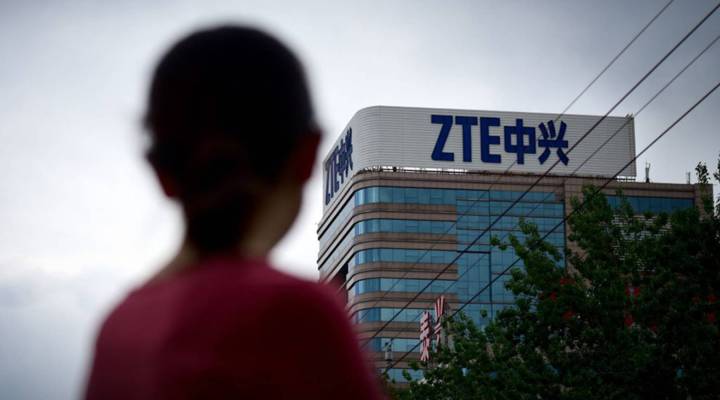 COPY
The ZTE logo is seen on a building in Beijing on May 2, 2018. WANG ZHAO/AFP/Getty Images
Marketplace Tech Blogs

The ZTE logo is seen on a building in Beijing on May 2, 2018. WANG ZHAO/AFP/Getty Images
Listen Now

U.S. trade tensions with China are very much about technology. The Trump administration is set to roll out new restrictions this week on Chinese tech investments in the United States and possibly more tariffs in areas like robotics, aerospace and green tech. That’s on top of the new 25 percent tariff, set to take effect on July 6, on other Chinese imports, many of them tech related. The United States says the taxes are punishment for intellectual property theft and forced technology transfer — the idea that American companies must share tech secrets with Chinese companies in order to do business there. Jennifer Pak is Marketplace’s China correspondent based in Shanghai, and she recently attended a consumer electronics show there. She told Marketplace Tech host Molly Wood what Chinese manufacturers were saying about the tariffs. The following is an edited transcript of their conversation.

Jennifer Pak: A lot of them actually don’t really buy the U.S. argument that these tariffs [are] about IP protection. In fact, most of them — actually, all of the people I’ve spoken to, whether they’re academics, whether they’re manufacturers — they say this is about stunting China’s rise.

Pak: I think what people here dispute is this term “forced tech transfer,” because a lot of times, this happens through joint ventures, especially with state-owned enterprises. So you’re talking about the green car industry. Well, actually, the whole automobile industry, but also financial services, strategic sectors that the government here feels [are] very important. That’s when you have to have a joint venture. And in those joint ventures, these companies are saying — European ones, also American firms — that they’ve been told in no uncertain terms that if they don’t hand over this tech transfer then they’re not going to get certain market access. It’s not written down, and this is why the Chinese government has been able to deny up until now that this happens on a systemic level.

Wood: It seems like one of the many complicating factors in this kind of trade “cold war” that we’re in now is that the supply chains are very intertwined, that the U.S. market is very dependent on Chinese components and that the Chinese market is also very dependent on U.S. components. How much are people talking about that? Like, just needing semiconductors for their phones?

Pak: I have spoken to, for example, TV manufacturers. What they’re looking for is they’ve decided that, OK, if this is what the rules are, and the Trump administration, that they’re against imports from China, then let’s base our production somewhere else. Maybe set up a plant in the U.S., which sounds good, but then at the end of the day, China’s advantage has always been price. And also, the logistics, right? It has the capability of producing large quantities, and the U.S. is a huge market for them. So whether these plants or whether these other local manufacturers can really provide that kind of volume that they need is another question, and also how much will it to cost to build? There is this sense when I talk to people that both governments need to satisfy the consumer, right, who are the ones who are going to have to bear the extra costs themselves, because none of the manufacturers I’ve spoken to said that they’re going to absorb this cost. They can’t; 15 percent, 25 percent, they can’t. The margins that China is working on are very small. What they’re gaining on is volume, right? They sell more, so than they can earn more. But actually, per product, their profit margins are very small. So, if you’re talking about 25 percent, they definitely have to pass it on to the consumer. And so, there’s this belief amongst them that at some point in time, the two governments have to negotiate and compromise. And they’re hoping, even now with the tariffs that are going to be effective July 6, there is some hope that something could change before then.