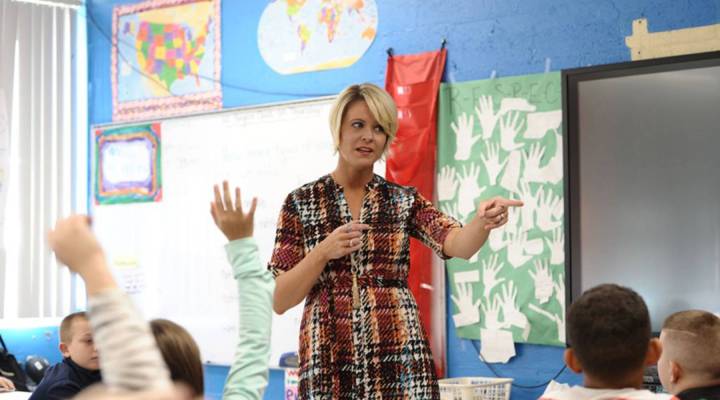 Amy Grady, who ran as an independent for a seat in the West Virginia state Senate, teaches in her classroom at Leon Elementary on Oct. 18, 2018 in Leon, West Virginia.  West Virginia teachers went on strike this year demanding higher pay and better health care. MICHAEL MATHES/AFP/Getty Images
Divided Decade

Amy Grady, who ran as an independent for a seat in the West Virginia state Senate, teaches in her classroom at Leon Elementary on Oct. 18, 2018 in Leon, West Virginia.  West Virginia teachers went on strike this year demanding higher pay and better health care. MICHAEL MATHES/AFP/Getty Images

Ten years ago, the economy broke, and today America is a much different place. For the past year, Marketplace has been reporting on how the 2008 financial crisis changed the country. Here is what we’ve learned about how it changed jobs.

Nearly 9 million American workers lost their jobs during the Great Recession. Unemployment in the U.S. peaked at 10 percent in late 2009.

Today is a much different picture. Unemployment is near its lowest level in 50 years.

On paper, the American labor force has more than recovered, but when you dig a little deeper, the imprint of the financial crisis is visible in the types of work people now do and how they get paid for it.

Recession college grads are a decade behind

For many members of the class of 2008, every paycheck over the past 10 years has been a reminder of the financial crisis. That’s because we learned that the level of financial security you achieve in life can have a lot to do with the economy in which you start your career.

Graduating into a recession makes finding an entry-level job tougher, which can delay career advancement. It can also force people to take jobs with smaller companies that don’t pay as well or force them to switch fields altogether, taking any job available to pay the bills.

Because of these factors, young recession graduates tend to make less than non-recession grads, and their salaries don’t catch up for 10 or 20 years. That can result in $60,000 to $100,000 less in lifetime earnings:

But even though the class of 2018 is entering one of the most robust job markets in decades, it too will face challenges. The average annual entry-level salary for a college graduate has been flat since 2005 at just over $50,000, and after adjusting for inflation, entry-level pay is only up 6 percent since 1960. Add the explosive growth to student loan debt and the climbing costs of housing, and it’s clear that college grads face a tough start no matter when they enter the workforce.

Graduates from 2008 and 2018 met at the University of Central Arkansas for a roundtable discussion.

Most of the new jobs created in the past decade were “alternative work.” That means temp, on call, contract and freelance, and one in three adults say they do some kind of nonstandard gig work to get by. The labor force participation rate fell sharply during the recession and remained there, hovering around 63 percent in 2018. That means the share of working-age adults who have a job or are actively looking for one is near a decadeslong low.

Today’s average hourly wage has roughly the same purchasing power it did in 1978. That means wage stagnation is a decadeslong problem. But the post-Great Recession employment landscape is unique because that stagnation has continued throughout the recovery, even as the unemployment rate has continued to drop near historic lows. Historically after a recession, as unemployment went down, the hiring market became more competitive and wages went up. That direct relationship fractured during this recovery, however, leaving many economists baffled.

In the auto industry, there is now a stark division between workers hired before the financial crisis, and those hired after. At plants where employees are represented by the United Auto Workers union, many post-recession hires are in a different tier than their pre-recession counterparts, meaning they get paid less, receive fewer benefits and face a longer climb to advancement. In some non-union plants, like the Nissan facility Marketplace’s Scott Tong visited in Canton, Mississippi, most employees start out as contract workers and have to follow a step-by-step plan to earn a permanent spot. The path is designed to take as little as six months, but for many it can take years, if ever.

In the past the use of temp workers was largely cyclical. Companies would employ contract help when business was dicey, but when things turned up they’d hire on permanent staff to lock in the best talent. The Great Recession and recovery may have changed things. When the economy finally came back this time, the hiring of full-time employees surprisingly did not. The farming out of work may be a permanent feature of today’s economy, raising for some labor experts the question of whether the postwar employer-employee social contract has become a thing of the past.

This could mean bad things in the event of another recession. Research of private sector data shows during the worst years of the Great Recession — from 2007 to 2009 — overall employment fell around five percent. During those same two years, temp jobs plummeted by 30 percent.

Companies didn’t just cut back on hiring new employees during the recession, they also cut back on investing in existing ones. Economist Chris Farrell told us that when the recession hit, training budgets were one of the first things to get slashed.

Farrell: Businesses had multiple lines of workers out the door so they didn’t really have to invest much in training. And this is on top of a trend of corporate America moving away from training anyway.

Farrell says the overall lack of investment in developing employees may be partially responsible for the complaints by many companies that there is a shortage of qualified workers.

Teacher pay is still in a recession

We asked you to share your stories of how the financial crisis changed your life for our series “How We Changed,” and we heard from a lot of teachers. In response to the crisis states slashed education funding, and as of 2015, the year when the most recent comprehensive data was published, 29 states were still below pre-recession funding levels for K-12. That means teacher pay in several of those states has been nearly frozen for a decade. In addition, teachers told us they are working with less support staff and fewer resources.

Casilda Espinoza, a high school government teacher in Phoenix told us that her students this year had no textbook at all because the one she had been teaching with was no longer relevant.

Espinoza: The book we had was outdated. I do not believe President Obama was in our book; I think it might have been from 2001 and 2002.

What’s more, studies show 45 states spent less on higher education in 2018 than in 2008. That adds around $7 billion to the cost of public college for students who are already saddled with twice the student loan debt of pre-recession grads, and who are entering a job market where unemployment may be low, but jobs are more precarious and more temporary.

There is another financial crisis potentially looming in the economy. Only instead of financial institutions needing a bailout, it may be a whole generation of Americans who need a lifeline this time. The number of seniors filing for bankruptcy has nearly doubled since 2007, to a high of 12 percent. The financial crisis is a big part of that increase, along with mounting debt for things like medical care, mortgage loans, credit card bills and even student loans for co-signers. In fact, more seniors are carrying debt into their 60s and 70s than ever, with the average amount of debt getting well into five figures.

Many seniors saw their retirement accounts wiped out in 2008. Those who pulled their investments in panic or simply to make ends meet after losing jobs or homes, missed out on the past decade of stock market gains.  Others who planned to continue working suddenly found themselves unemployed in a new economy, where low wage, part-time work was all they could find. Instead of looking forward to retirement, they were now facing downwardly mobility.

Collectively, the national retirement savings deficit is estimated to be between $6.8 and $14 trillion.  What makes this even scarier, is that the problem isn’t limited to today’s seniors. The median retirement savings account balance in America is $0 for working age individuals. That’s a shocking statistic that shows that this problem is just getting started. Part of that lack of savings has to do with a shift in employment benefits. Professionally managed pensions have largely been replaced by 401(k)s, where individuals are mostly responsible for their own retirement savings.

As employment becomes more precarious and more temporary for workers today, the ability to save gets harder as well. That means an already multitrillion-dollar problem could get a whole lot worse.