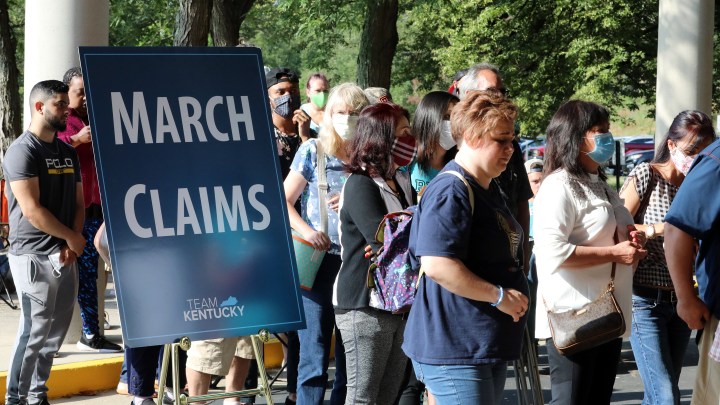 Another 444,000 Americans filed first-time unemployment claims last week, the lowest level since March 14, 2020. At the opposite end of the unemployment spectrum, 4.2 million Americans are long-term unemployed, meaning they’ve been jobless for 27 weeks or more, according to the latest data from the Bureau of Labor Statistics.

“When people are unemployed for an extended period of time, their financial resources tend to run out,” said Francine Blau, an economics professor at Cornell University. “The psychological impact on their confidence and self-esteem is greater.”

In addition to the personal hardships, long-term unemployment is bad for the economy as a whole.

“It may be an indicator of how long we need to get the economy back on track,” Blau said. “The long-term unemployed may be more difficult to draw back into the labor force and become employed than those who’ve been unemployed for a shorter period of time.”

But why do you have to be out of work for more than six months before you’re classified that way? People start feeling the stress and financial hardship of long-term unemployment before they hit the 27-week mark. Patrick Carey, an assistant commissioner in the Office of Employment and Unemployment at the statistics bureau, has one explanation.

But this wasn’t always the definition of long-term unemployment.

“Previously, the term was used for those jobless for 15 or more weeks,” Carey said. “At that time, the 27 weeks or more category was described as ‘very long-term unemployment.'”

The BLS changed the definition of long-term unemployment to 27 weeks or more of joblessness in 1994, following the recession that began in 1990.

“Its aftermath was associated with slower than usual improvement in the ‘unemployed 27 weeks or more’ category,” Carey said.

“In January 2011, the Current Population Survey was modified to allow respondents to report longer durations of unemployment,” Carey said. Before the Great Recession, the longest a respondent could tell the BLS they’d been out of work was two years. The bureau increased that to five years. “Part of the motivation here was the unprecedented rise in the number of persons with very long durations of unemployment.”

The current recession in the United States is unlike any other economic crisis, and it remains unclear what the labor market recovery will look like. But if previous recessions serve as an indicator, it’s possible that this recovery could once again change the way we think of the long-term unemployed.