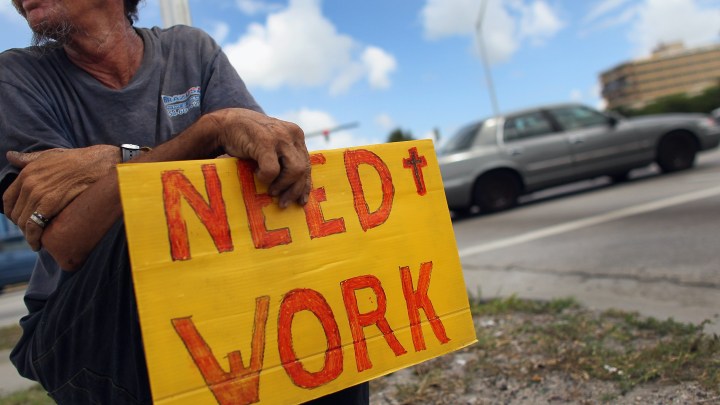 COPY
People who have been out of work for prolonged periods may lose the confidence they need to keep looking. Joe Raedle/Getty Images
COVID & Unemployment

People who have been out of work for prolonged periods may lose the confidence they need to keep looking. Joe Raedle/Getty Images
Listen Now

Despite a solid bump of 379,000 new jobs in February, Friday’s employment report shows a continued rise in one closely watched category: Americans who have been jobless for more than half a year.

About 4.1 million workers fall into the category of long-term unemployed, that is, being jobless for 27 weeks or more. That’s nearly four times the number of a year ago, just before the onset of the COVID-19 pandemic. The statistic applies to roughly two of every five people without a job.

And the longer people are away from the workforce, the longer it takes them to return.

“Their skills can deteriorate, or at a minimum not keep up,” said Erica Groshen, labor economist at Cornell University. “They will lose confidence. They will lose contacts with the working world. And their references may no longer be valid.”

They also could face employment discrimination. In many studies, researchers have sent fake resumes to job sites and found that the longer they’re supposedly out of work, the harder it is to land an interview. And hiring managers may not be the only people to stigmatize these job hunters.

“It’s not just employers,” said sociologist Ofer Sharone at the University of Massachusetts Amherst. “That stigma is also often held by colleagues, former colleagues, friends. Even a spouse. Even people close to you can start to view the long-term unemployed with some suspicion.”

Individuals can internalize that stigma, undermining the confidence and optimism they need to keep looking, Sharone said.

There’s evidence long-term joblessness can even create economic pain for a person’s children, for instance limiting their level of education, according to economist Austin Nichols at Abt Associates, a research firm.

One way to mitigate this, Nichols said, is policy, including the COVID relief bill Congress is currently considering.

“Because it’ll replace a lot of that lost income,” Nichols said. “And to the extent that it gets the economy jump-started, it will also start getting people back to work more quickly. So a bigger relief package could mitigate those long-term consequences of long-term unemployment.”

Another potential source of relief is employers. If the pandemic subsides, due to the vaccination campaign or other measures, businesses could bounce back quickly.

“And when those open back up, people may start getting reemployed,” said Stephen Woodbury, economist at the Upjohn Institute for Employment Research. “And so the outlook for the long-term unemployed may not be as bad as usual.”