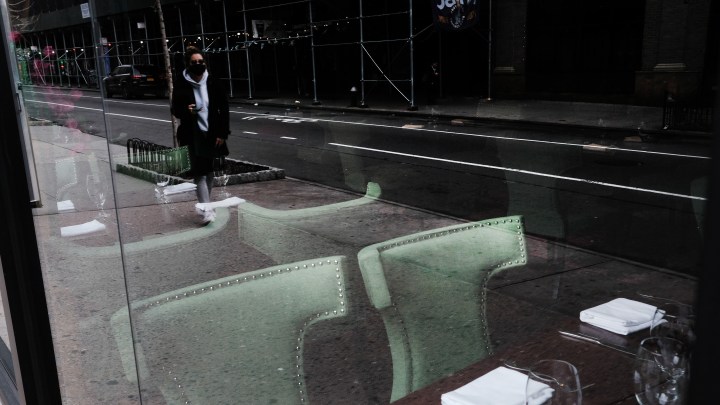 COPY
The view from an empty, closed restaurant in New York City early in the pandemic. The long-term unemployed have become a large proportion of the overall jobless population. Spencer Platt/Getty Images
COVID & Unemployment

The view from an empty, closed restaurant in New York City early in the pandemic. The long-term unemployed have become a large proportion of the overall jobless population. Spencer Platt/Getty Images
Listen Now

The December jobs report, released Friday, showed a slight uptick in long-term unemployment, which reached 37% of the jobless population — quadruple what it was before the pandemic. But due to the unique nature of the pandemic-induced recession, that figure might not account for all of those out of work.

The new data from the federal Bureau of Labor Statistics shows that about 4 million Americans have been unemployed for six months or more.

“This is obviously a story of people losing their job at the beginning of the crisis in March and April and not getting it back,” said Dean Baker, co-founder and senior economist with the Center for Economic and Policy Research.

Those out of work for 27 weeks or more make up a growing share of the unemployed, and that could have enduring consequences, Baker said.

“After people have been unemployed for more than six months, they find it much harder to get a job,” he said. “And if they do get a job, their labor market prospects could be permanently worsened.”

But the long-term unemployment numbers only include people who are actively looking for work, said Julia Pollak, chief economist with job site ZipRecruiter.

“There is this group that’s feeling discouraged and who say that they’re worried they may not find a job at all, and feel like giving up,” she said.

Right now there aren’t many jobs to look for in some of the hardest-hit sectors, like retail and hospitality. Those industries are dominated by younger workers, people of color and women.

Women’s labor force participation has fallen to levels not seen since the 1980s, said Emily Martin, vice president for education and workplace justice at the National Women’s Law Center.

“We are really seeing a risk that women and families are not only being hard hit now, but really may be taking a long time to recover,” she said.

With disruptions to school and day care, many moms have been left to watch kids at home. More than 2 million women have exited the labor force during the pandemic, potentially setting back their careers beyond the current crisis.