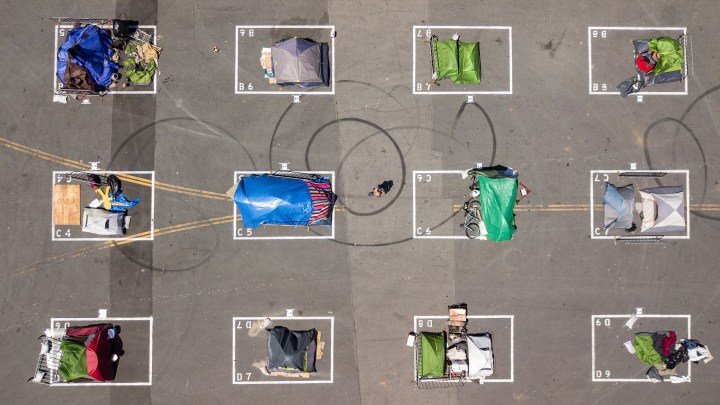 There is a real risk that the sustained unemployment in the United States could lead to a significant increase in homelessness over the next few years.

A new report from the nonprofit Economic Roundtable projects that without significant government intervention, the pandemic will cause twice as much homelessness as the Great Recession.

If nothing changes, about 600,000 people could end up in shelters, on the streets or crashing with family or friends over the next three years.

Anthony Orlando is one of the study authors and a real estate professor at California State Polytechnic University, Pomona. He said we probably won’t see most of that for another year or even two.

“Homelessness is one of the last things that we detect when an economy tips into a recession,” he said.

Because, Orlando said, people tap into whatever they can to try to pay their rent as long they can.

“Whether it’s their savings, or their family support, or whatever they can tap into, stimulus payments,” he said. “And we don’t start to see who can’t pay their rent anymore until after the recession is over.”

After the Great Recession, researchers found about 10% of people who lost jobs in Los Angeles, for example, ended up becoming homeless. And they predict that number will likely be higher this time.

“Because the people who have been losing jobs are those who are already the most vulnerable,” said Jill Khadduri, who researches housing policy and homelessness at Abt Associates.

Vulnerable people like those “who are already living in poverty, very low-wage workers, people who are in communities of color [and] households with little wealth,” she said — and with little savings or financial support from family to fall back on.

Housing advocates say one of one of the most effective ways to help people avoid homelessness would be to give more of them vouchers under Section 8 of the Federal Housing Act.