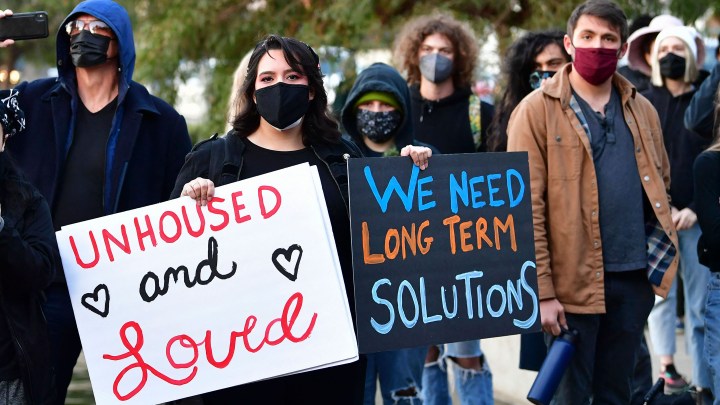 Homelessness advocates across the country are feeling pretty hopeful right now. And, weirdly, it’s mostly because of the pandemic.

“I’m much more confident about our ability to reduce the number of homeless people, at least in the short run,” said Nan Roman, chief executive of the National Alliance to End Homelessness.

That’s because COVID has resulted in a tidal wave of federal money directed at helping the roughly 580,000 people without stable shelter.

Under the Biden administration’s American Rescue Plan, $10 billion is set to go to local governments this year for emergency housing vouchers and low-income housing.

Compared to the plan’s $1.9 trillion overall price tag, that may not sound like much. But Roman said the additional funding could be a game-changer.

“We think it would allow us probably to house about 150,000 people, and create about 30,000 units of affordable housing,” she said.

The pandemic may have made that easier, too.

“There is a lot of hotel and motel stock that’s been losing money and is acquirable,” Roman said. “There are also office buildings that have been abandoned.”

Tomiquia Moss is the chief executive of All Home, a nonprofit that’s leading the effort. She said she knows the dustbin of history is littered with plans to end homelessness that, well, didn’t end homelessness.

“I think it’s fair that folks are skeptical, given the history,” Moss said.

Take those empty hotels and offices. With the economy rebounding, there are more private developers ready to compete with governments and nonprofits. And many homeowners will still fight to keep homeless housing out of their neighborhoods.

But at the very least, the pandemic may be making the public more receptive to Moss’ message about the urgency of the crisis.

“I have been doing this work for more than 20 years in the Bay Area, committing to treating homelessness like a public health crisis,” Moss said.

A deadly virus is a good reminder of that.