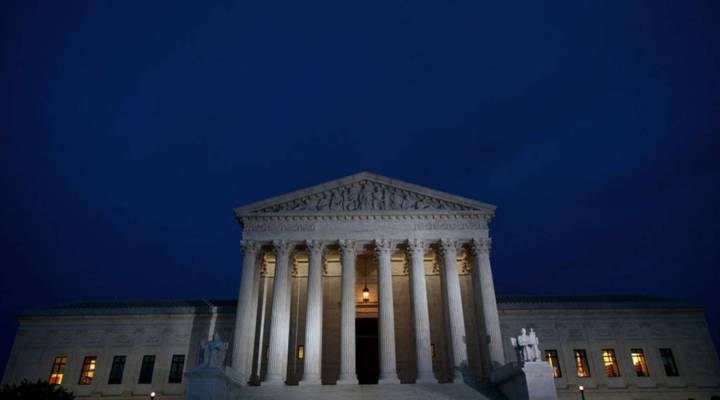 COPY
A view of the Supreme Court at dusk in Washington, D.C. Drew Angerer/Getty Images

A view of the Supreme Court at dusk in Washington, D.C. Drew Angerer/Getty Images
Listen Now

Update: The Supreme Court has ruled that government workers who aren’t in unions don’t have to pay union fees.

Supporters and opponents of organized labor are on tenterhooks this week awaiting a landmark Supreme Court decision in Janus v. AFSCME.

The case was brought by Mark Janus, a child support worker in Illinois, who chose not to join the American Federation of State, County and Municipal Employees, the union that represents state employees. Janus also objected to paying a $45 union fee (known as an “agency” or “fair share” fee) that was automatically deducted from his paycheck every month under AFSCME’s contract. A union’s right to collect such fees was affirmed under the Supreme Court’s previous Abood decision, which allowed unions to charge only for services that nonunion members benefit from, such as negotiating and administering a collective bargaining agreement and handling grievance procedures.

The Janus case boils down to this: Can public-sector unions compel nonunion members to pay these fees? Or is that a violation of those workers’ First Amendment rights, and thus impermissible under the Constitution because the fees may also support the union’s political speech and legislative agenda?

A lot is at stake for labor unions nationwide if AFSCME loses, said Celine McNicholas, director of labor law and policy at the progressive Economic Policy Institute.

A loss in Janus would put public-sector unions nationwide under the same restrictions on raising funds that are already in place in 28 states that have passed so-called right-to-work laws. In those states, public- and private-sector unions are already banned from collecting agency fees.

That includes Nevada. And yet, as labor unions have seen their economic and political power decline nationwide, they’ve maintained much of their strength in Nevada.

“Even though we are nominally  right-to-work, we have a very strong labor movement in the private sector because of the hospitality industry,” said Ruben Garcia, who teaches labor law at the University of Nevada, Las Vegas.

Nearly 13 percent of Nevada workers are union members, according to the BLS. The percentage rose slightly last year, which Garcia chalks up to Las Vegas’ massive hotel and casino industry, along with a smart strategy by local unions. Jobs serving in bars and restaurants, cleaning hotel rooms or dealing cards on the casino floor can’t easily be outsourced abroad. And good customer service is crucial to help visitors enjoy themselves, so they’re more likely to gamble and spend more.

“The dependence the industry has on workers — particularly on the Strip — has given them a significant bargaining advantage,” Garcia said.

The Culinary Workers Union is one of several powerful hospitality unions based in Las Vegas, with nearly 60,000 members, many of them women and immigrants. Despite Nevada’s right-to-work law, the union says that more than 90 percent of culinary workers covered by a collective bargaining agreement voluntarily choose to join the union.

Annette Wright de Campos has worked at the Golden Nugget and been a member of the Culinary Workers Union for 30 years.

Annette Wright de Campos has been a union member working at the Golden Nugget in downtown Las Vegas for more than 30 years.

“I started out in room service,” she said. “I was young, petite, pretty. It was great tips at that time.”

Wright de Campos got more training, moved up the organizational chart to work banquets and now makes $20 an hour plus benefits. She has worked nonunion in the past: between high school and college, she had a minimum-wage job at a KFC.

“My grandmother — she was one of the founders of the Culinary Union — she came in and grabbed me and said, ‘You’re starting your family, you need health care that’s affordable to you, you need a future with a pension.'”

This year, the Culinary Workers Union has been negotiating new five-year contracts with Caesar’s, MGM and other major casino companies. Spokeswoman Bethany Khan said the union has been monitoring economic and technological changes that could threaten members’ wages and job security, like the potential replacement of hospitality workers with robots.

“We’ve seen demos of robot concierges, room service delivery, bartenders,” Khan said. “We are tackling automation technology in this contract with retraining opportunities, severance if there are layoffs — but a goal was to retain workers.” Meanwhile, Khan said the union is working with employers to expand the use of workplace technologies such as Wi-Fi-enabled “panic buttons” that allow hotel workers to call for help if they’re being sexually harassed or assaulted by customers or other staff.

Khan said the Culinary Workers Union lost members in the Great Recession, as tourism turned down and casinos laid off staff. Now the union is building its membership back up and trying to expand its reach. More than 3,000 culinary and bartending workers recently voted to unionize at Station Casinos, one of the state’s biggest private employers. The company’s been fighting that union drive.