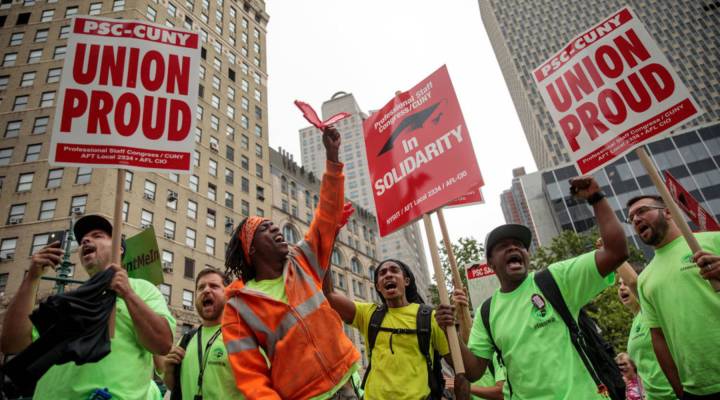 On Wednesday, the Supreme Court ruled in favor of plaintiff Mark Janus in the case of Janus v. AFSCME, ruling that deducting mandatory union fees from public sector employee paychecks is a violation of the First Amendment. The decision disrupts a major source of income for the labor movement and ultimately, impacts union-represented employees.

Black women make up the highest share of public sector workers, according to the Economic Policy Institute, and close to one in five black adults work in some type of government job. Derrick Johnson, the president and CEO of the NAACP, warns this decision could impact black public sector workers disproportionately.  In a statement, he said, “protecting the fundamental rights of all citizens is extremely important. Civil Rights and Workers Rights are inextricably linked. Today’s decision could dismantle unions as we know them, which has paved the way for African Americans and other marginalized groups to break economic barriers, reach into the middle class, and establish financial security for their family.”

Marketplace’s Sabri Ben-Achour sat down with Johnson to discuss how he sees this decision playing out in African-Americans communities in years to come.

Sabri Ben-Achour: Why is this decision about how public sector unions collect fees of particular importance to African-American workers?

Derrick Johnson: African-Americans, we have had a long journey trying to make sure that, not only our franchise, our vote is appreciated, but our ability to negotiate for fair labor. We were brought here primarily as a source of free labor. We had to fight really hard through the segregation period so we wouldn’t be exploited for cheap labor. And finally, when we were able to achieve a level of success in terms of the workforce, it happened through organized labor.

Ben-Achour: And you do view this decision as impairing the ability to collectively bargain down the road?

Johnson: Absolutely. Whenever you have a decision where you handicap a collective bargaining unit by requiring them to represent members but yet not requiring those individuals to pay dues, you create a scenario where you have representation by requirement without any resources to provide for the representation. African-Americans make up a substantial number of the public sector workers. African-American women make up a substantial sector of teachers in urban districts and this directly impacts their ability to negotiate a fair wage for their labor.

Ben-Achour: Black women make up 17 percent of public sector workers. A higher percentage of black women work in the public sector than any other group. What do you expect this to do to their wages?

Johnson: It will have a disparate impact. You know, women currently make less than men. And then when you take the ability of workers to collectively bargain away, particularly African-American women who are part of a bargaining unit, you expose them to lower wages over time. It may not be an immediate impact but it definitely will have an impact. And unfortunately, that impact would begin to also manifest itself in, in the neighborhoods they live in, the quality of life. So this decision will have a long term drastic effect on, not only African-Americans, but American workers in general.