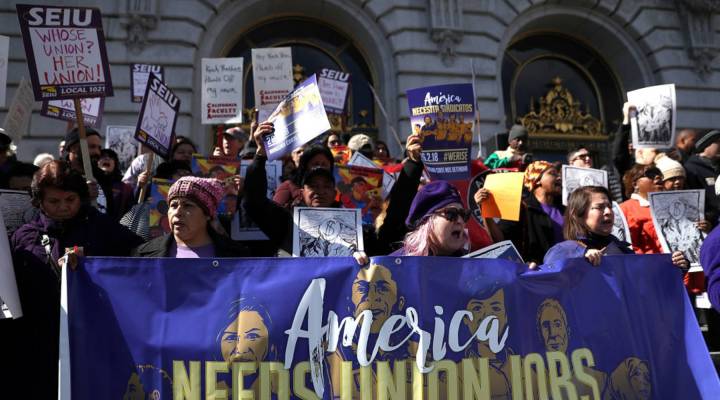 The Supreme Court says government workers can’t be forced to contribute to labor unions that represent them in collective bargaining, dealing a serious financial blow to organized labor.

The justices are scrapping a 41-year-old decision that had allowed states to require that public employees pay some fees to unions that represent them, even if the workers choose not to join.

The 5-4 decision Wednesday, in the case Janus v. AFSCME, fulfills a longtime wish of conservatives to get rid of the so-called fair share fees that non-members pay to unions in roughly two dozen states.

The case was brought by Mark Janus, a child support worker in Illinois, who chose not to join the American Federation of State, County and Municipal Employees, the union that represents state employees. He objected to paying a $45 union fee  (also known as the “fair share” fee or an agency fee) that was automatically deducted from his paycheck every month under AFSCME’s contract.

“[Unions] have already been diminished from prior court decisions that allowed members to not have to pay fees that would cover their political activities, so their ability to raise money through membership dues has been diminished,” said Sheila Krumholz, executive director of the Center for Responsive Politics.

Yet unions will still be required to represent everyone in the collective bargaining unit, even if a worker isn’t paying that “fair share” fee, according to Celine McNicholas,  director of labor law and policy at the progressive Economic Policy Institute.

“This is going to make effective collective bargaining very difficult for unions that are going to be asked to do the same with fewer resources — potentially dramatically fewer resources,” McNicholas said.

Right now, 28 states have right-to-work laws that allow workers to opt out of paying union dues.

In the South, right-to-work legislation has been on the books since the ’40s, with these states using low unionization as a way to attract business investment, according to Barry Hirsch, a labor economist and a professor at Georgia State University.

But places farther north — like Indiana and Michigan — have begun to pass right-to-work laws for several years now.

Wendy Smith, a school nurse in Baltimore and the president of Local 558 of AFSCME, told us earlier this year that she understands why someone who’s not in the union wouldn’t want to pay the fee.

But she argues the union uses those fees for negotiating contracts, benefits, higher wages and filing grievances.

Smith added that public-sector unions have been a way into the middle class for many African American families, like hers.

Brad Hershbein, an economist at the W.E. Upjohn Institute for Employment Research, said a quarter of all state and local government workers are people of color. A loss for AFSCME means public-sector unions have less bargaining power to negotiate wage increases, which could lead to an increase in inequality.