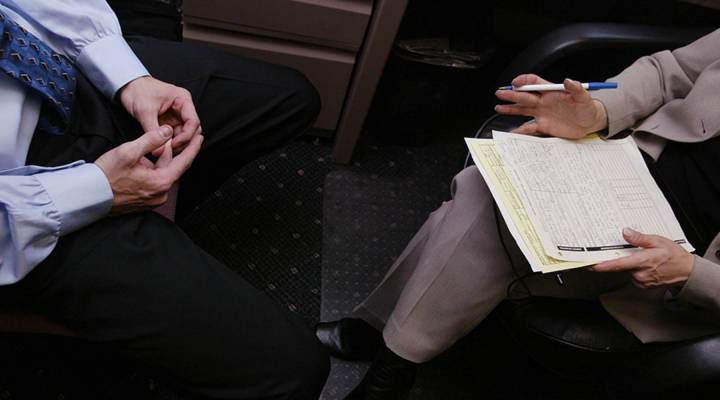 COPY
A job applicant speaks with a recruiter during an interview in New York City. Chris Hondros/Getty Images

A job applicant speaks with a recruiter during an interview in New York City. Chris Hondros/Getty Images
Listen Now

The job market is now being flooded by the class of 2018 — both college and high school graduates. Leticia Aguilar is among them. She’s about to graduate from Franklin High School in Portland, Oregon.

“I will be working in the summer and then I will be attending PCC [Portland Community College],” Aguilar said recently in the college and career counselor’s office at her school. She’s hoping to continue her education after community college and transfer to a four-year college to complete a degree in social work or teaching.

Aguilar is 17 and supports herself financially: “I’ve been working in retail 30-plus hours a week since I was 16,” she said. Once she’s in college, she hopes to find a better-paying job to make ends meet. And she might just be in luck.

Entry-level wages are rising fast. Payroll processor ADP reports that 16- to 24-year-olds entering the workforce are earning on average 5.2 percent more than they did last year (as of March 2018). Average hourly earnings for workers overall rose just 2.6 percent since last year, according to the Labor Department’s April jobs report. ADP finds that the increase in entry-level wages from 2017 to 2018 is more than double the increase for entry-level workers (2.5 percent) in each of the previous two years.

One reason: A lot of young people work low-wage jobs when they start out, and a host of cities and states have raised their minimum wages recently, said economist Michael Strain, who writes about the issue at the American Enterprise Institute. “In a lot of cases, firms raise wages for workers who aren’t earning the minimum wage but who are earning close to the minimum wage,” said Strain. “So there’s kind of a ripple effect.”

And some service jobs that young people gravitate to are in high demand, said economist Andrew Chamberlain at jobsite Glassdoor (see Glassdoor’s May 2018 Local Pay Report).

“We see pretty fast wage growth for low-skilled roles like retail cashiers, security officers and baristas,” he said. “Workers hardly ever move between cities for those roles. That means it’s easy for there to be labor shortages in one particular area.”

The wage story is different for new college graduates. According to a recent report by human resources firm Korn Ferry, the average starting salary for class of 2018 graduates will be $50,390. That is 2.8 percent more than in 2017, but only marginally up from the previous year after adjusting for inflation.

In fact, according to Korn Ferry senior client partner Maryam Morse, the average starting salary for new college graduates “has been pretty stagnant” since 2009, after adjusting for inflation. Morse said that even though unemployment is low, labor shortages are developing and employers are actively recruiting on college campuses, it remains tough for new graduates coming out of the gate.

“There are still a lot of people graduating from college,” said Morse, “so there’s still fierce competition to land a job. Organizations have their pick of who they want to hire.”

Still, young workers with a college degree typically earn a lot more than those with only a high school diploma.