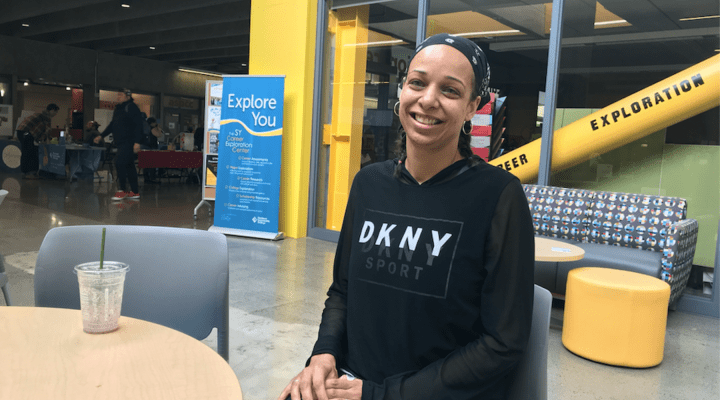 COPY
Sabrina Hayes, a community college student, is applying for financial aid to transfer to Portland State University. She's a single mother of 5-year-old twins and has borrowed about $50,000 to attend college so far. Mitchell Hartman/Marketplace

Sabrina Hayes, a community college student, is applying for financial aid to transfer to Portland State University. She's a single mother of 5-year-old twins and has borrowed about $50,000 to attend college so far. Mitchell Hartman/Marketplace
Listen Now

The United States is approaching a remarkable and worrisome milestone. Total outstanding student loan debt rose to nearly $1.5 trillion in the fourth quarter of 2018, according to the Federal Reserve Bank of New York. Meanwhile, failure to pay the money back is rising: 11.4 percent of student debt is now 90 or more days delinquent or in default. The delinquency rate has doubled since 2003.

Approximately two-thirds of college students borrow to attend, primarily through the federal government’s subsidized and unsubsidized loan programs. The Institute for College Access & Success reports that 2017 borrowers owed $28,650 on average at graduation. According to Capstone Wealth Partners, the median monthly payment is approximately $200 a month; the average payment is around $350 a month.

Students and parents are worried about the debt they’ll accrue. According to a recent survey by The Princeton Review, “level of debt to pay for the degree” topped the list of concerns (42 percent of respondents); second came “will get into first-choice college but won’t be able to afford to attend” (31 percent). A decade ago, “won’t get into first-choice college” was the top concern. Now it ranks third.

Glover estimates she’s taken out $30,000 in student loans to attend.

“I have a combination of financial aid, scholarships and loans,” she said. “Even after that, my parents are helping pay for the remainder. I try to avoid thinking about this as much as I possibly can, just because it’s stressful.”

Glover grew up in Portland, Maine. Her father works in insurance; her mother works at a grocery store.

“For the first two and a half years, I considered moving back home and going to state school where I could have gone almost for free,” she said. “But I believed in the idea that going to a small, private school would help me in a way that a state school wouldn’t. The flip-side of that hope is the terrible fear that I’ve just put myself in thousands of dollars of debt and given myself no real advantage.”

Glover isn’t sure what career she wants to pursue after she graduates with a concentration in environmental studies.

“A huge thing that the debt has done is make it feel inconceivable that I will be able to buy a home,” she said, “or have kids or buy a car. Just rent and groceries is hard enough.”

Borrowing for college can lead to buyer’s remorse. According to a recent Bankrate.com survey, between one-quarter and one-third of those with student debt say it’s caused them to delay buying a house or car, saving for retirement, saving for an emergency, and/or paying off a credit card. Among millennials, 17 percent have delayed marriage and more than 10 percent have delayed having a child. If they could do it over, 20 percent of those with student debt for a four-year degree say they’d choose a cheaper school, different major, two-year degree or not attend college at all.

Sabrina Hayes, 41, attends community college in Portland, Oregon. She plans to transfer to Portland State University in the fall to finish a bachelor’s degree, concentrating on human resources management. She has 5-year-old twins and started school when they were infants.

“I think when it’s all said and done, because I’m a single mom and it’s taking me longer, a four-year degree is going to end up costing me close to $80,000,” Hayes said.

Before returning to school, she worked restaurant and human-services jobs. As a student, she’s qualified for federal Pell grants and financial aid, and has borrowed about $50,000 in federal student loans so far.

“It’s terrifying,” Hayes said. “You hear these stories that there’s no guarantee you’re going to get a job. I’m so far in, though, I don’t want to quit and have all this debt on my back.”

Asked if she regrets starting down this path, she said: “Absolutely. I would have sought going into this career first, before going to school for it. It’s overwhelming how much I’m going to have to pay a month. You have this idea that you’re going to keep it under control, but it’s almost like a credit card — you just keep going and going.”