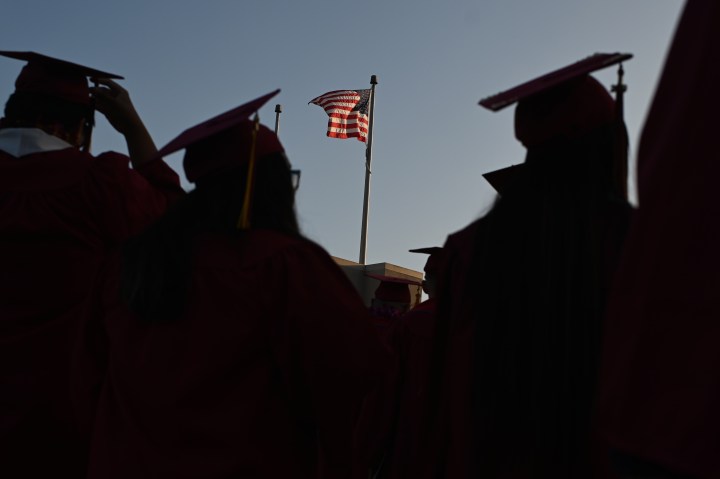 These days, all the kids are doing it — borrowing money to go to college.

Whether their families are higher income, lower income, or somewhere in between, a majority of all students today take out loans to cover at least part of their undergraduate degree. Which wasn’t always the case.

In fact, over the last 20 years, the percentage of students from higher-income families — defined here as making more than $114,000 a year — who take out loans to get a bachelor’s degree has more than doubled, from 30% in the mid-1990s to 60% now, according to a new report out Wednesday from the American Enterprise Institute. The percentage of students from low-income families who take out loans is higher, just over 75%, but hasn’t increased nearly as much since the 1990s.

“I think the impression one gets, listening to the reports about student debt, the student debt crisis and how much students are borrowing, is that this is really hitting low-income families the hardest. Meaning that college is getting expensive, and so lower income families are turning more and more to student debt to pay for it,” said Jason Delisle, author of the study and a resident fellow at AEI who works on higher education financing. “Actually, the really big changes in student debt are happening in the upper-middle class and high-income families.”

Even with the sharp increase in the percentage of middle and upper-income students who are taking out loans, though, students from low-income families are still borrowing at higher rates.

“Low-income students have historically always been relying heavily on student loan debt, so to a certain extent, there’s only so much that that number could have grown over the last 20 years,” said Persis Yu, director of the Student Loan Borrower Assistance Project at the National Consumer Law Center. “What I think we’re looking at now is, because tuition costs have grown so much, that now no family can afford a college education without student loan debt.”

The amount of debt students are taking on to get a bachelor’s degree has also jumped significantly since the mid-1990s, for people from all financial backgrounds.

“There’s been an increase across the board, in all the income groups, but the biggest change in the amount of debt that students and families are taking on is from these upper-income families,” Delisle said. “They are now well in the lead in terms of how much they borrow.”

A lot of that likely has to do with how much the cost of college has gone up in the last 20 years. Students from higher-income families are also more likely to choose more expensive schools, and less likely to qualify for financial aid. Their parents also tend to take out more Parent PLUS loans to help them pay for college, which were included in AEI’s analysis.

“If you are using a Parent PLUS loan you can borrow up to the full cost of attendance. That includes tuition and fees, room and board, books, everything,” said Dominique Baker, an assistant professor of education policy at Southern Methodist University. “So they’re able to borrow a lot more money.”

Ultimately, though, the amount of debt someone graduates with does not necessarily mean that much about their ability to pay it back. Even though students from middle and higher-income families might take on more debt than students from low-income families, Baker said, “it is likely that these amounts that we’re talking about that the students are borrowing, that it is a larger share of the student’s economic resources when we’re talking about the students that have less than $22,000 in income, compared to students who have $114,000 in income.”

But, she added, “I think just because folks are higher-income or middle class also doesn’t mean that they’re not struggling with their student loan debt.”

For one thing, Baker said, someone’s income, or their family’s income, is only one part of their financial picture.

“Income is not wealth,” she said. “That’s critical to keep in mind, because there are some families that have the same amounts of income, but they have different economic resources that they can tap into to help support students through college.”