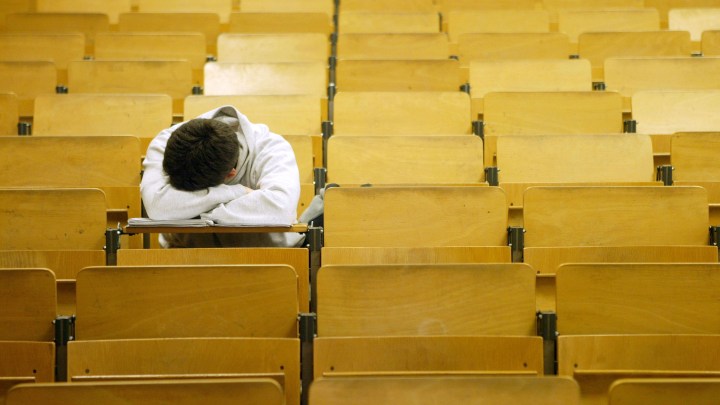 The Class of 2019 faces one of the best job markets for college graduates since the end of the Great Recession. And many of this year’s new bachelor’s degree-holders also face a daunting debt load to start paying back six months after graduation.

Approximately two-thirds of students borrow to attend a two- or four-year institution — mostly through the federal student loan program. In 2016, the average loan balance at graduation for students who borrowed was $26,900 at public universities, $31,450 for those at private schools, based on the latest data available from the Institute for College Access & Success.

Approximately one-third of graduates leave school with no student debt. Most are from families that, based on a federal financial aid assessment, can afford college on their income and savings alone. They don’t qualify for government-backed student loans.

But there are also lower-income students who would qualify to borrow based on financial need, but are pursuing a college education free of debt. They’re getting help from new programs in states such as New York, Rhode Island, Tennessee and Oregon, that offer free tuition to some students pursuing two- and four-year degrees.

Portland State University is one of those institutions, with a new program available to undergraduates called “Four Years Free”.

PSU is the largest campus in Oregon’s public-university system, with approximately 26,000 students attending classes in an urban setting at the south end of downtown. A streetcar line runs through the central plaza on campus, past pizza, pita and noodle restaurants, upscale coffee shops, and a Ben & Jerry’s.

PSU undergraduate Emily Hodgson, 22, regularly attends classes in the buildings surrounding the plaza. But she rarely stops for a drink or a bite to eat there.

She doesn’t have the time or money. “I go to school, I do my homework, I go to work, and then I sleep for six hours,” said Hodgson. “I’m tired all the time.”

Hodgson didn’t go right to college after high school. Her mother had developed serious health problems, which sapped the family’s finances. “My dad made over $100,000 a year,” said Hodgson. “But suddenly because of all these hospital expenses, I had to take care of myself and find jobs on my own. And I told myself: ‘I’m never going to go to college, because I can’t afford that.’”

Three years after graduating high school, though, Hodgson is enrolled —majoring in Japanese, and taking a full load of classes.

Her tuition and fees — $9,100 for the 2018-2019 academic year — are covered by PSU’s Four Years Free program. To be eligible, students have to be from Oregon, have a good academic record from high school, and have $50,000 or less in family income

Hodgson’s parents haven’t supported her financially for years. She had to demonstrate her hardship to university officials. “I had my priest send a letter, a police officer who actually knew about my mom because she has had 911 calls. I had all these people who had official stamps and letters, to get four years free.”

The program doesn’t cover her other expenses — transportation, books and supplies, room-and-board. Hodgson lives with two older siblings in the suburbs. “My brother and sister aren’t going to take care of me. Well, they take care of me, but not financially as much. So I pay about $700 a month for rent, and then I have to buy my own food and clothes, so I need a part-time job to make that work.”

During the school year, she worked nights and weekends at a sushi bar. It unexpectedly closed recently, and she’s now looking for a job on campus.

Hodgson would likely be eligible to borrow up to $14,000 a year in federal student loans, based on her financial situation. But she doesn’t want to. She’s seen how college debt has affected her brother and sister: “They’re struggling to buy a house and pretty much live an independent life, because they’re still paying off student loans.”

Deborah Westlight, a fellow classmate of Hodgson, is also trying to support herself and not take out student loans.

She attended community college to earn course credits and save money before transferring to Portland State. She lives with her mother, contributing to the mortgage and utilities, and she works part-time during the school year and summer teaching circus acrobatics to young children.

“I am responsible for buying my own food and clothes and things like that,” she said.

Like Hodgson, Westlight isn’t sweating over PSU’s $9,100 a year in tuition and fees.

“My college education is being paid for entirely by my grandfather,” she said.

Westlight’s grandparents were middle-class academics. “The moment I was born, they opened a 529 savings account for me,” she said.

Asked how she feels, benefiting from intergenerational wealth that’s paying for her education, she said: “I don’t tell people. It’s not necessarily a shameful thing. But even though my parents are not rich —at all— it feels almost dirty that I don’t have this big stressor in my life that most of my friends do.”