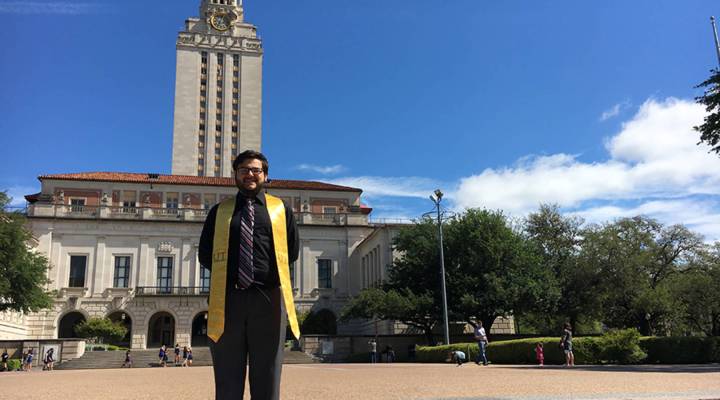 COPY
Saul Rivera has just graduated from the University of Texas-Austin with a degree in astronomy. He's been applying for entry-level jobs at planetariums, museums and observatories around the country. Mitchell Hartman/Marketplace
Divided Decade

Saul Rivera has just graduated from the University of Texas-Austin with a degree in astronomy. He's been applying for entry-level jobs at planetariums, museums and observatories around the country. Mitchell Hartman/Marketplace
Listen Now

The class of 2018 is entering the most favorable job market for new college graduates since the Great Recession. In many parts of the country, employers report growing labor shortages, and on-campus recruitment to fill entry-level positions has been brisk.

At the University of Texas-Austin, Saul Rivera was snapping photos in his cap and gown recently, weeks before crowds of family and friends descended on the campus for the university’s mid-May commencement.

“I’m about to graduate in astronomy,” Rivera said. “I want to go  into outreach — planetariums, museums, observatories, interacting with the public. That’s the aspect I enjoy most.”

Rivera grew up in a working-class suburb of Dallas. His father installs car alarms and runs a small store, his mother helps out on a food truck the family owns. Neither of his parents graduated high school.

Rivera remembers tough times back in the Great Recession. “I would be hanging around a lot in my dad’s shop. Then the Recession hit and it was empty for months. My dad started to get worried, bills were starting to be an issue, and I became more conscious of how much I would need to pay for university.”

Rivera said his parents helped with his college costs as much as they could — though they were skeptical that astronomy was a good career choice. He’s also gotten scholarships, financial aid, and taken out approximately $6,000 in student loans.

He’s been applying for jobs that pay about $45,000/year, a bit below average for new college graduates in recent years, according to salary data from the National Association of Colleges and Employers.

“I could say I’m pretty confident,” said Rivera. “And I do have backup plans, just for the meanwhile. Some of my friends work at the airport, so they could get me a job there, and if not, maybe just part-time helping out my dad, or a fast-food place.”

That high level of confidence is justified for this generation of college graduates — whether they have degrees from well known, selective schools like UT-Austin, or less academically-selective and less expensive schools, like Tarleton State University in Stephenville, Texas.

It’s a regional branch of Texas A&M, and attracts a lot of first-generation college students preparing for jobs in nursing, education, business and the energy industry.

“When I came here I was a nursing major,” said Tarleton State senior Amy Kendall, 21. “But I realized that wasn’t the lifestyle I wanted, and anatomy is really hard.” She quickly regrouped and set her sights on human resources and career counselling. Kendall was raised by a single mother and said money was tight growing up. She’s attended Tarleton State on a full scholarship, and has her next steps planned out: “Hopefully get a job on a college campus, then I’m getting a master’s in educational administration with an emphasis in higher education.”

Dan Finnigan, CEO of the recruitment website Jobvite, said that for today’s college graduates, getting an additional degree or professional certification will be crucial to career advancement and higher pay. “The shortage of people with the skills needed for the new jobs of the future has never been greater,” he said.

But graduating into a good job market won’t necessarily make it easy for members of the class of 2018 to get ahead financially. According to the National Association of Colleges and Employers, the average entry-level salary for a college graduate has been flat since 2005 — at just over $50,000/year, after adjusting for inflation. Entry-level pay is only up 6 percent since 1960.

Kevin Hayes got his B.A. at the University of North Texas and then moved to Portland, OR to attend Lewis and Clark Law School. He’s racked up around $250,000 in student loan debt, mostly for law school.

Kevin Hayes, 33, is a recent transplant from Texas to Portland, Oregon. “Prices are rising — a 500-square-foot apartment in a pretty junky building is going for $1,100 a month,” Hayes said of the rapidly gentrifying Portland neighborhood he now lives in.

Hayes grew up in the Dallas suburbs and briefly attended community college before dropping out and working in a variety of low-paid services jobs. He went back to school to get a B.A. at the University of North Texas while working at Starbucks, then moved to Portland to attend Lewis and Clark Law School, graduating in 2015.

While setting up his own law practice in Portland, he’s driven for Lyft “as a transitional gig, bringing in some extra money and borrowing from future income in the expectation of getting a better-paying position somewhere else later.”

Hayes has massive student loans to repay. And he’s in good company: Americans’ total outstanding student loan debt has doubled in the past ten years, to $1.47 trillion, according to the Federal Reserve Bank of New York.

“A substantial amount of every penny I bring in goes back to paying debt — I believe it’s $250,000,” Hayes said. “I just sort of resign myself to a lifetime of paying this debt — as though it’s a tax and I’m never going to not be paying it.”