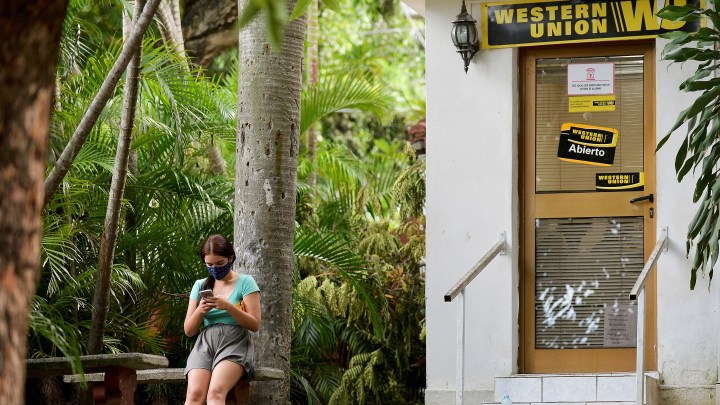 COPY
A woman waits outside a Western Union office in Havana, Cuba, on Oct. 28, 2020. Yamil Lage/AFP via Getty Images
COVID-19

A woman waits outside a Western Union office in Havana, Cuba, on Oct. 28, 2020. Yamil Lage/AFP via Getty Images
Listen Now

Immigrants in the U.S. sent about $150 billion to their home countries around the world in 2017.

For some countries, that money adds up. Remittances from migrants in the U.S. and elsewhere are worth about 20% of El Salvador’s GDP. In a global economic crisis, though, can that money keep flowing?

Karen Rivera is a hairdresser at a salon in Brooklyn where business is down around 60% since the pandemic. Rivera still sends about $300 dollars a month back home to her family in Nicaragua.

She said her family lost their jobs back home because of the pandemic. With fewer clients, she can’t send as much as she used to. But she hasn’t missed a payment yet.

According to the Pew Research Center although remittances to Latin America dropped sharply around April, they spiked over the summer. Immigrants from countries like Mexico and the Dominican Republic have actually been sending more money than before.

“So that the foreign-born were starting to recover jobs more quickly than the U.S.-born back when the economic downturn really hit back in April,” Lopez said.

And context is important. While the situation here in the U.S. is dire, it can be worse back home.

“A lot of what drives remittance flows is not just the supply of money that migrants have to send, but also the demand that their friends and family members have back home for a safety net,” said NYU professor Roy Germano, author of the book “Outsourcing Welfare.”

Germano expects remittances to continue to grow. But not everyone agrees. Dilip Ratha, an economist focusing on remittances at the World Bank, said many migrants from Latin America who went back to work are starting to lose their jobs again.

“My sense is that, going into 2021, there will be a significant decline in remittance flows, and that will be about, according to our projections, a decline of 8.1%,” Ratha said. He said that’s going to seriously impact the well-being of people in receiving countries.

Back in the hair salon in Brooklyn, Rivera worries about not being able to send her family money past the holidays. She said she’s been dipping into her savings to send money back home and take care of herself. By December, that money will run out.