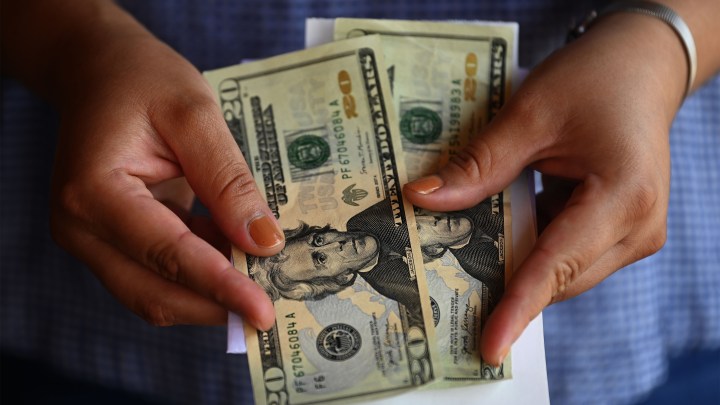 COPY
A woman counts cash outside a U.S. remittance collection agency in El Salvador. Remittances to that nation and others in the region declined sharply, then rebounded. Marvin Recinos/AFP via Getty Images
COVID-19

A woman counts cash outside a U.S. remittance collection agency in El Salvador. Remittances to that nation and others in the region declined sharply, then rebounded. Marvin Recinos/AFP via Getty Images
Listen Now

Last year, migrants from Latin America and the Caribbean remitted nearly $100 billion to family members back in their home countries. Early in the pandemic, the World Bank estimated that remittances from the U.S. to Latin America would fall by 20%. But payments to some Latin American countries have bounced back.

For the past eight years, 24-year-old Byron Chamorro’s father has been sending money to his wife, Byron’s mom, in Guatemala. Then, the pandemic hit. Lots of people stayed home. But not Chamorro’s father. He delivers food for an Italian restaurant in Brooklyn, New York.

“He actually started working on the weekend, which was something he did not do,” Chamorro said.

And the money he remits to Guatemala?

Mark Hugo Lopez, director of global migration and demography research at the Pew Research Center, said that in April, there was a steep decline in remittances to El Salvador and the Dominican Republic, but those have rebounded. He said that’s because migrants from those countries tend to do essential work — farming, food production, hospitality. Meanwhile, remittances to Mexico never declined at all. In fact, they’ve been increasing all year.

“Many Mexican immigrants have been in the U.S. for so long that they’re able to navigate better some of the uncertainties about the labor market associated with the COVID-19 downturn,” Hugo Lopez said.

That’s good news for Mexico, which is grappling with the loss of tourism. Roy Germano, senior research scholar at the New York University School of Law, said that’s true of a lot of Latin America.

“But often in those countries, there really isn’t much of a safety net to speak of, and migrants play that safety net role,” he said.

Diego Vacaflores, an economics professor at Texas State University, plays that role. He sends money monthly to his parents in Bolivia. When he saw the shortages of products here in the U.S., “I knew that was gonna happen eventually in Latin America, and I tried to get my family to be prepared for that, to do it before things run out in the market,” he said. 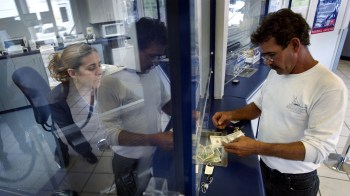