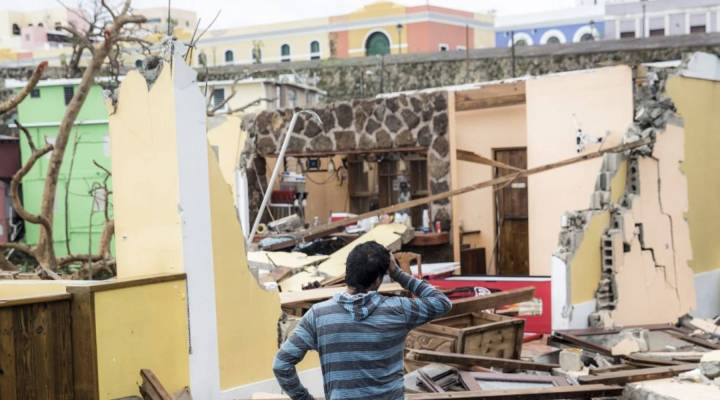 COPY
A view of damaged homes in San Juan, Puerto Rico, the day after Hurricane Maria made landfall on September 21, 2017. Alex Wroblewski/Getty Images

Puerto Rico is billions of dollars in debt. It declared a form of bankruptcy last year, and its finances are now overseen by a federal control board. And then there was Hurricane Maria last fall. Puerto Rico is still struggling to recover, and it’s looking to private investors for help.

Puerto Rico rented a booth at a recent trade conference just outside Washington, D.C., aimed at luring international investors to the United States. One of Puerto Rico’s challenges is reminding investors that it is a U.S. territory.

“If you do business in Puerto Rico, you’re doing business in the U.S.,” said Puerto Rico’s Commerce Secretary Manuel Laboy Rivera. He says, in a weird way, Puerto Rico is being rediscovered in the wake of Hurricane Maria. “It put us on the map,” he added.

Puerto Rico is using its time in the spotlight to sell itself — literally. It’s proposing public/private partnerships. Private companies manage airports, water meters and the electric grid, collecting fees along the way. The government is even privatizing student housing on a University of Puerto Rico campus. Puerto Rico’s biggest airport is already privatized. Why turn to the private sector?

“The government has no cash, and so a partner with cash is appealing,” said Myrna Rivera-Cardona of Consultiva, an investment advisory firm in Puerto Rico.

Rivera-Cardona worries that outsiders will crowd out local firms. She’s already seeing an influx of investment in Puerto Rican real estate. Some of those investors move to Puerto Rico from the U.S. mainland.

Tom Mcosker moved to Puerto Rico from New York in 2014. He runs an investment bank and debt collection company, employing almost 50 locals. He rode out Hurricane Maria in his high-rise condo.

“It was scary,” he said. “The door to the terrace actually blew open.”

Along with hurricanes, the investors Puerto Rico has managed to attract also have to deal with creaky infrastructure. Mcosker says the power went out for a day recently. But, no matter, he just turned on his generator. He also has water and food stockpiled. He’s got backup plans, he said and backups for the backups.