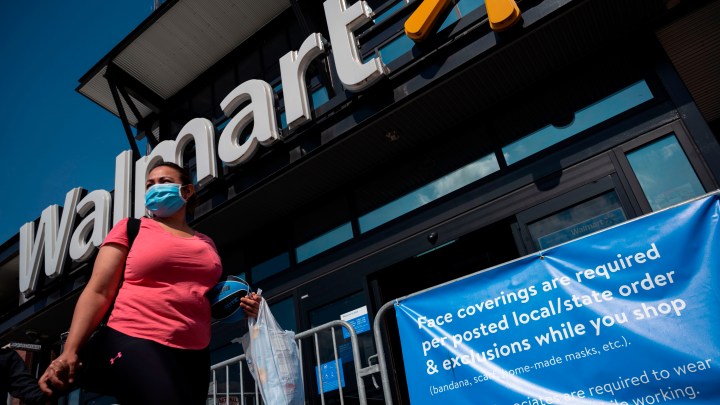 COPY
A woman wearing a facemask walks in front a Walmart store in July 2020. Walmart is requiring vaccines for corporate employees but not retail workers. Andrew Caballero-Reynolds/AFP via Getty Images

A woman wearing a facemask walks in front a Walmart store in July 2020. Walmart is requiring vaccines for corporate employees but not retail workers. Andrew Caballero-Reynolds/AFP via Getty Images
Listen Now

The vaccine mandate movement is growing. Federal workers will have to get vaccinated or get weekly COVID-19 tests. Similar mandates are happening in California and New York.

There’s also a long list of universities, hospitals and, increasingly, private corporations that are making the move, most recently Walmart. But there’s a catch: The company is going to require vaccines for corporate employees but not retail workers.

Most employers have been doing what they can to encourage workers to get vaccinated. Now, virus variants are helping make their case.

“I think delta has really been a game-changer,” said Lauren Rivera, a professor of management at Northwestern University.

The pressure is building as companies move toward return-to-office target dates, Rivera said. Walmart’s target is Labor Day, and its office workers must be vaccinated by early October.

But the company isn’t requiring this for most of its employees — staff at stores and warehouses.

“My best guess is that they are afraid of losing workers,” Rivera said.

There’s a labor shortage in retail, and a mandate could feel intrusive to front-line workers, said Gretchen Chapman, who researches vaccination behavior at Carnegie Mellon University. Many of them have been on the job since last March.

“It might be seen as insensitive to institute a requirement where the greatest burden of that requirement falls on the very people who have paid the biggest costs so far in the pandemic,” she said.

“They can sort of signal like, ‘Hey, we really want to keep our workers and our customers safe and do our part nationally, and so we’re starting at the top,'” she said.

As one of the country’s largest private employers, Walmart has influence, not just on its more than 1.5 million associates in the United States, but on the service industry at large.

“I’m certain there are a lot of other retailers paying attention to what they’re doing and vice versa,” said Vince DiGirolamo of market research firm Mintel.

For now he thinks companies will keep taking baby steps. Walmart recently doubled its vaccine incentive for store workers to $150.