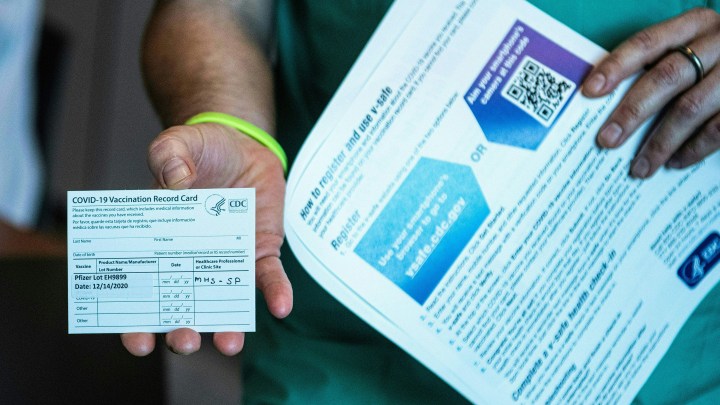 COPY
A person holds up their COVID-19 vaccination card after receiving a dose of the Pfizer-BioNTech vaccine. Chandan Khanna/AFP via Getty Images
Fast-Track Vaccines

A person holds up their COVID-19 vaccination card after receiving a dose of the Pfizer-BioNTech vaccine. Chandan Khanna/AFP via Getty Images
Listen Now

As the economy continues to reopen, more businesses are starting to require employee COVID vaccinations, albeit with certain conditions and medical or religious exemptions required by state laws.

Still, there are questions regarding COVID vaccines that employers will need to ask themselves: How effective are mandates in actually motivating employees to get vaccines? How do people feel right now about vaccine requirements? And is there a right way to approach vaccine mandates in the workplace?

Dan Gorenstein, host and executive producer of the health-policy podcast “Tradeoffs,” explored some of those questions in a recent episode.

Below is an edited transcript of Gorenstein’s conversation with “Marketplace Morning Report” host David Brancaccio on what he and his team found.

David Brancaccio: What do we know about when organizations, when companies, say you gotta get the COVID vaccine? That’s a mandate. Pretty rare, but what happens?

Dan Gorenstein: So well, look. Target, Applebee’s, your favorite local diner, these kinds of businesses do not have vaccine mandates for their workers. So there’s really no, like, ideal research out there to guide employers. What we do know comes from vaccine mandates in health care settings — hospitals, nursing homes — who’ve mandated a flu shot, not COVID. And that includes this one really interesting paper from Corey White, who’s an economist at Cal Poly in San Luis Obispo, who is looking at hospitals in California. And talking with him and other health economists, there’s a sense that the data that is available is generalizable, to some degree.

Gorenstein: Right. So in the case of the California hospitals, the mandates increased uptake of the flu shot by about 10%. But David, what makes this paper really interesting is that Corey, the economist who did it, wanted to know what impact that sort of 10% jump had, kind of the “so what?” question, right? There was a 40% drop in the number of people who entered the hospital and caught the flu inside the facility. And he found a 20% drop in the number of people coming to the hospital with flu-like symptoms. So here’s the big idea: Increasing vaccination rates made the hospitals themselves safer and it meant fewer people in the community were getting sick. So for employers who are thinking about whether to institute the mandate or not, they could ask themselves, is my business a social hub the way, like, a hospital is? And the bigger your business is a social hub, the more a vaccine mandate could curb spread.

Brancaccio: You’re also exploring other data from other vaccines about what happens in an organization if employees get to decide not once and for all, but once a year, whether they’ll get a certain vaccine.

Gorenstein: There’s this really interesting case study in Washington, D.C. In 2009, the school district ultimately mandated girls get the vaccine for the human papillomavirus, or HPV. And at the time, that was supercontroversial. Lots of parents were worried that it might lead to promiscuous sexual behavior or whatever. It’s no longer that controversial. But at the time, parents were offered an opt-out. And if they opted out, that was it. It was just, like, a one-time deal. And then they were never asked again. A few years later, though, this school district switched to an annual opt-out. This guy, Brandyn Churchill, who’s finishing up his Ph.D. at Vanderbilt, studied this, and what he found is that after the school district’s switch to the annual opt-out, it led to an 11% increase in vaccinations, David. And so what’s kind of cool also is that, like the Pfizer and Moderna COVID shots, HPV is a multidose vaccine. And switching to that annual opt-out also increased the number of kids getting all of their shots. So if an employer does do a mandate with an opt-out, I think the lesson here is keep asking, force people to engage and make that active decision one way or another, consistently.

Brancaccio: Now, all that said, the idea of an employer requiring vaccinations is very polarizing.

Gorenstein: It is very polarizing, and employers have to really sort of sift through the options. I mean, you can mandate this, but mandates have led to, for example, Houston Methodist, a hospital down there, you had 7,500 people sign a petition saying that employees shouldn’t have to get vaccinated in response. You’ve got lawmakers in, I think, 40 states that have introduced legislation trying to ban this from happening. And also, in some instances — this is small — there have been a couple of lawsuits that have been filed against employers who’ve put these mandates in. And finally, you’re going to anger some workers. Some people might end up quitting because they don’t want to do this. So there are some real downsides, or pushback, that employers have to consider.

Brancaccio: Now some of this is complicated in the case of the COVID vaccine specifically, in that we’re getting those based on emergency approval. And I guess, what, there are some lawyers [who] argue, when it’s only under emergency approval, people should definitely have the right to say no for now.

Gorenstein: Right. But other lawyers that we talked to for our reporting pointed to the Equal Employment Opportunity Commission, which is a federal agency that enforces workplace anti-discrimination laws. They released guidance in December that said employers could mandate the vaccine as long as they offered religious and medical exemptions. So that seems to be the dominant theory among the legal experts as of right now.