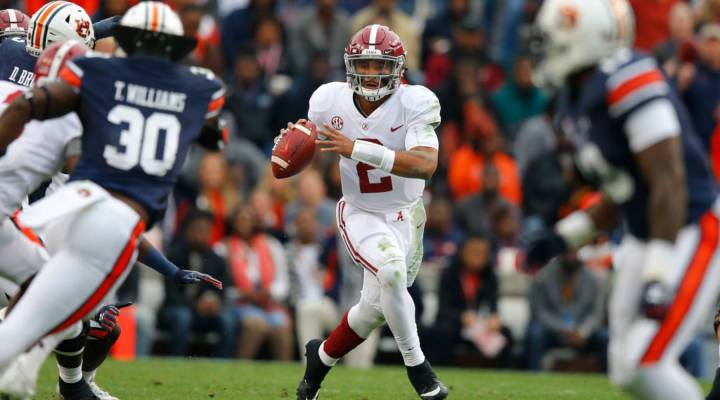 COPY
Jalen Hurts #2 of the Alabama Crimson Tide looks to pass during the first quarter against the Auburn Tigers at Jordan Hare Stadium on November 25, 2017 in Auburn, Alabama. Kevin C. Cox/Getty Images

Jalen Hurts #2 of the Alabama Crimson Tide looks to pass during the first quarter against the Auburn Tigers at Jordan Hare Stadium on November 25, 2017 in Auburn, Alabama. Kevin C. Cox/Getty Images
Listen Now

It’s a new year and a new series of tax rules just came into effect. One of those rules is of particular interest to university athletic departments. Gone are the days when alumni and college sports fans could write off donations made to secure college sports season tickets.

Roger Norris is a fan of the University of Alabama’s Crimson Tide. He recently got an email from the school’s athletic department. It suggested he make his annual contribution before Dec. 31 because that money — 80 percent tax deductible in 2017 — would no longer qualify as a tax break in 2018. Tom McMillen, president of the Lead1 Association, whose members include 130 athletic directors, said some of his members have told him they’re worried donations could drop.

“If it costs you $5,000 to buy your season tickets, will that deter you if you don’t get a deduction?” he wondered.

Early estimates speculated donations could drop some 20 to 30 percent. But Richard Schmalbeck, a law professor at Duke University, who makes similar contributions himself, and wrote a paper condemning the tax loophole, said the change is overdue.

“The notion that you should not be allowed a deduction for contributions that buy something, namely in this case seating privileges, is really just a sound tax policy argument,” he explained.  Schmalbeck said he’ll continue to purchase Duke football and basketball season tickets, even without the deduction. “It does not depend on any particular predisposition about the virtues of the college sports system.”

The tax change may not hurt sports like college football and basketball, which draw in the big bucks, anyway. It’s more problematic for sports with lower profiles like swimming, softball or track and field.

Athletic departments tried to get out in front of a potential budget shortfall, regardless, asking some donors to send in cash for several years upfront — before the end of 2017.