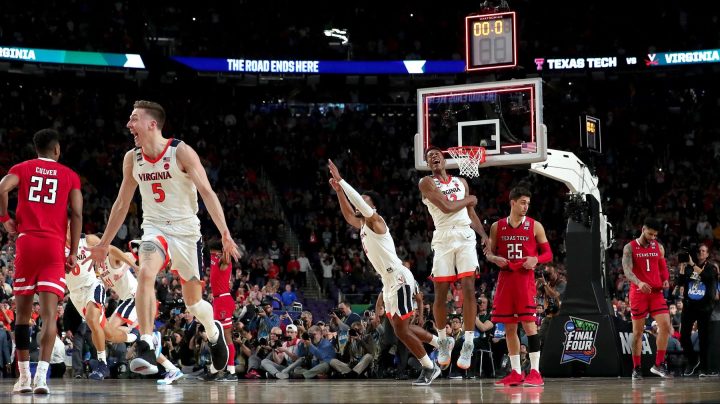 The Virginia Cavaliers celebrate their victory over the Texas Tech Red Raiders in the 2019 NCAA championship. The men's basketball tournament is the financial engine that drives the NCAA. Streeter Lecka/Getty Images
COVID-19

The Virginia Cavaliers celebrate their victory over the Texas Tech Red Raiders in the 2019 NCAA championship. The men's basketball tournament is the financial engine that drives the NCAA. Streeter Lecka/Getty Images

College sports will look different this year as schools grapple with keeping student athletes and fans safe from potential exposure to COVID-19.

Colleges in New York will play sports without fans in the fall, while Big Ten teams will play only conference games. The Patriot and the Ivy leagues have canceled all fall sports, and Stanford is cutting 11 varsity sports, including fencing and men’s volleyball.

In the short term, smaller, private schools may be better situated financially than larger state universities to weather a diminished sports season. But another missed NCAA basketball tournament could be a disaster for collegiate programs of all sizes.

The men’s basketball championship is the financial engine for the National Collegiate Athletic Association, bringing in over $867 million in TV broadcasting and marketing rights annually, and more than $177 million in tournament ticket sales. The tournament was canceled last spring because of the pandemic.

“For the NCAA, everything is basically done on the backs of men’s basketball,” said Mike Roth, athletic director at Gonzaga University, a private Jesuit school in Spokane, Washington. “If men’s basketball takes another year without March Madness, I’m not sure what’s going to happen. I know it most likely won’t be good.”

But Gonzaga has been able to restructure its 2020-21 athletic budget by relying on donors and the school’s cash reserves, Roth said.

“Now, can we sustain that? For more than just this fiscal year? Probably not,” he said. “That’s why this academic year — this sports year — it’s going to be so important, not just at Gonzaga, but at every institution for that matter.”

Lehigh University, a private school in Bethlehem, Pennsylvania, lost about a million dollars in NCAA money during the 2019-20 season, athletic director Joe Sterrett estimated. The school is leaning on the $2.5 million it raised in donations to fund scholarships and maintain its staff.

But Lehigh competes in the Patriot League, which has canceled its fall season. A year of lost ticket sales could cost the school half a million dollars, Sterrett said.

Private schools are preparing for another hit. A lengthy recession caused by the pandemic might jeopardize endowments and business sponsorships.

Joe Karlgaard, athletic director at private Rice University in Houston, said that the school has revised its 2020-21 budget, taking into account the probability of fewer donations and funds from sponsorships.

“I don’t think it’s a matter of our donors being unwilling to give,” Karlgaard said. “But we also recognize that many people around the country are poorer than they were before. We just wanted to make sure that we weren’t making assumptions.”

The bigger the athletic program, the bigger the financial hit. Ohio State, home to one of the country’s most valuable football programs, has over 40,000 students and a 105,000-seat football stadium. While ticket and concession sales are important, the real money comes from lucrative national broadcast agreements. Last year, the school brought in more than $45 million in media rights revenue for its athletic programs.

The revenue generated from football programs helps pay the salaries of its coaches, who are some of the highest paid public employees in some states. In 2019, for instance, Clemson University paid coach Dabo Swinney $9.3 million while South Carolina’s governor made $106,078.

The difference is that a NFL team brings in upward of $400 million in revenue; a college football program brings in less than $100 million, Berri said. “That only makes sense because in college, you don’t pay the players, so they’re funneling the money to the coaches.”

It’s not just the direct revenue from tickets, broadcasting contracts and NCAA payouts that will be missed this year. Both large and small colleges will be hurt by missed marketing opportunities.

Everytime Wake Forest makes it into the NCAA basketball tournament, it is a recruitment ad campaign for the school.

Some of those revenues come from events like summer camps, sports clinics, trade shows and graduations that rent athletic facilities on college campuses. They serve as a marketing tool for the institutions as well as feed local businesses that provide food, entertainment and lodging for visitors.

Take Notre Dame, near South Bend, Indiana. It’s the second-most popular tourist destination in the state after the Indianapolis Raceway, said Paul Browne, vice president for public affairs and communications at the university.

According to a 2018 Notre Dame economic impact report, the university supports about 16,700 regional jobs and brings $26.4 million to the regional economy during every home-game weekend.

“If you talk to many of the businesses near Notre Dame, [home games are] sort of like Black Friday. That’s where they make their profit for the year,” Browne said.

Notre Dame’s football season has been scheduled, but with the country still struggling to contain COVID-19, there’s no guarantee the games will be played. Some college athletes are forcing the issue. Thirteen football players from the Pac-12 conference threatened Sunday to boycott games if their demands for health and safety precautions aren’t met. The players are also demanding racial justice in college sports.