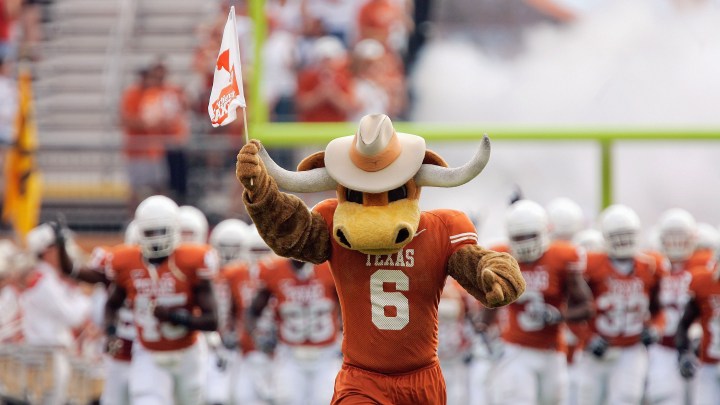 COPY
All in all, the University of Texas has cut about 6% from its sports programs. Brian Bahr/Getty Images
COVID-19

All in all, the University of Texas has cut about 6% from its sports programs. Brian Bahr/Getty Images
Listen Now

The budgets of many college athletics departments have taken a serious hit amid the pandemic. And as a result, many schools have had to make cuts.

Stanford University said this summer it would discontinue 11 varsity sports. The University of Iowa cut men’s and women’s tennis teams. Men’s tennis is no longer at 12 Division I schools, and men’s track is gone at nine.

Departments are also dealing with pay cuts, furloughs and layoffs. The athletics department at the University of Texas at Austin generated a record $224 million last fiscal year, more than any other college or university.

Almost all of that money came from ticket sales, concessions and TV contracts associated with football and men’s basketball. “So those revenue streams are huge,” said David Berri who teaches sports economics at Southern Utah University.

“They primarily go in the pockets of coaches, administrators, and then to facilities,” he said.

Home football games for the Texas Longhorns are being played in front of only a 25%-capacity crowd. The university hasn’t said how much money it’s losing as a result, but in 2018, ticket sales alone for those games brought in $67 million.

So, now, UT’s athletics department is trimming back. It laid off 35 people and said another 35 vacant positions would be eliminated. Even the football coach is taking a 15% pay cut. All in all, Texas cut about 6% from its sports programs.

That’s about the same percentage Ryan Ivey had to cut from his athletics department at Stephen F. Austin State University in east Texas. But his books look a little different.

He hasn’t laid off or furloughed anybody, yet, but he can’t fill open positions.

“And so, essentially, if we want those positions, then we have to buy them back in some form or fashion,” Ivey said. “So we have to figure out the budget aspect for that for us moving forward.”

Stephen F. Austin’s fall conference football games were postponed until the spring, but Ivey found out-of-conference schools to play. That’s generating some helpful income. Across the country, other colleges and universities are doing the same thing, trying to protect their budgets.

That could put student-athletes in harm’s way, said Michael Butterworth, director of the Center for Sports Communication and Media at the University of Texas.

“There are a lot of institutions that appear to be making decisions specifically by money,” Butterworth said. “And when you’re counterbalancing that with the public health risk, and the risk to the athletes who are shouldering that risk and that burden, that’s really uncomfortable.”

He said if a spike in infections could be tied back to an athletic event, there could be legal implications for universities, as well.