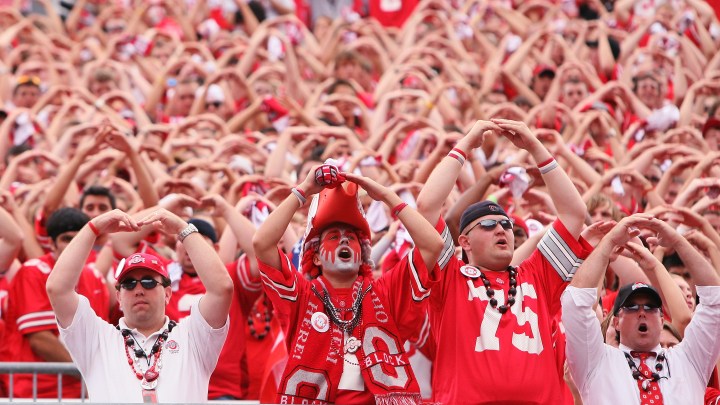 COPY
Fans cheer the Ohio State University Buckeyes at a 2008 game. In one year, sports brought in $209 million to the school. Jamie Sabau/Getty Images
COVID-19

Fans cheer the Ohio State University Buckeyes at a 2008 game. In one year, sports brought in $209 million to the school. Jamie Sabau/Getty Images
Listen Now

There’s this college sports phenomenon that economists study called the Flutie effect. It goes back to an iconic 1984 game, Boston College versus University of Miami. With just seconds on the clock, Boston quarterback Doug Flutie threw a Hail Mary, 48 yards for a touchdown.

That won the game for Boston College ⁠— and perhaps some students. The school reported applications went up 16% the following year.

“Universities view their athletic departments as the front door to their university,” said Stefan Szymanski, a professor of sports management at the University of Michigan.

Sports are PR powerhouses, and they make money. Recent data shows that in one year, Ohio State University sports brought in $209 million. More than half of that came from football. That’s in jeopardy with the announcement that because of the pandemic, Big Ten schools, made up of 14 major universities, will only play conference games this fall — an early sign that puts the season into question.

“This is a massive amount of money for athletic programs to be sacrificing, and obviously they don’t want to do that unless it’s absolutely necessary,” said Andrew Zimbalist, a sports consultant and a professor of economics at Smith College.

TV contracts, corporate sponsorship and ticket sales are at stake. To compensate, schools have started cutting back coaching salaries. And because football makes so much money, schools are looking at how to reduce spending on other sports.

“It’s almost impossible to overstate how important it is in terms of supporting hundreds of other athletes’ ability to participate,” said Molly Ott, a professor at Arizona State University’s Global Sport Institute. She added that financial losses this year could affect scholarships and money for student athletes in the future.