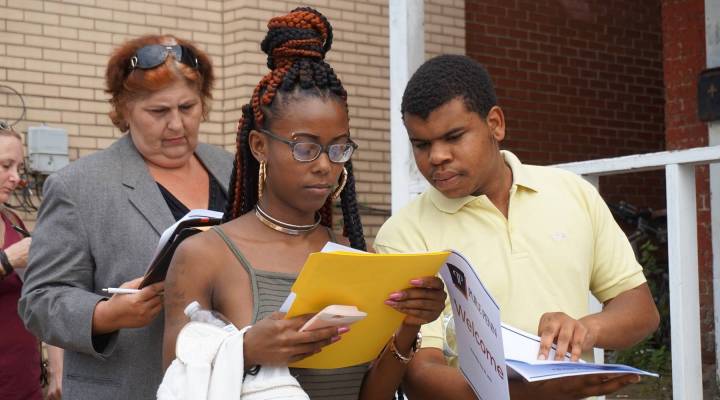 It’s a scorcher of a day in McKeesport, a city outside of Pittsburgh. And nearly 1,000 people are lined up to apply for just 25 jobs. There aren’t a lot of decent paying jobs around here — and these are double the minimum wage — with benefits. They’re in a new industry that leaders hope will revive McKeesport’s economy — medical marijuana. Since U.S. Steel left in the 1980s, “McKeesport has had its struggles — obstacles and challenges have been tremendous and its been a battle over the last few decades,” said Mayor Michael Cherepko.

The town has lost a third of its population, and one in four people live in poverty. That line of job seekers? It runs down a main street where nearly every storefront is empty. Cherepko said people here want to work. “I see families throughout the city of McKeesport whether its white, black whatever the case may be, it’s the same situation, I have people asking about jobs, asking about employment,” he said.

And when the PurePenn medical marijuana facility opens up on the spot where thousands of people once went to make iron pipes, workers will be doing everything from growing to processing medical marijuana. If the industry takes off, those who get in on the ground floor will be experts. For this community, it could become a new kind of company town. At least that’s what city leaders are hoping.

When medical marijuana became legal in Pennsylvania in 2016, the law also required that disadvantaged communities like McKeesport get priority for growers’ licenses and that minority job applicants get preference.

For decades, blacks have been disproportionately arrested — four times more often than whites — for marijuana charges. Now that marijuana has become a legal and booming industry in some parts of the U.S. — in North America the industry grew 30 percent last year to $6.7 billion in sales — a number that’s expected to keep growing, the group profiting the most is whites. In response, some states have passed legislation in the hopes of making the business of legal marijuana more diverse.

In the District of Columbia, Council member Robert White said if blacks don’t get in on the ground floor, “Then that space just won’t ever exist. What we will see is really a repeat of what we see say in the construction industry where minority-owned businesses have to settle for these small subcontracts as opposed to really being some of the prime players,” he said.

He wrote legislation to encourage minority-owned businesses to get preferences in the application process. “There may be one new industry in every person’s lifetime. And frankly I think that because the government has played an active role in creating wealth disparities by race then it must play an active role in trying to rebalance this,” he added.

If recent history is any guide, that won’t happen on its own. Ezekiel Edwards, a director at the American Civil Liberties Union has been tracking this industry. He said the prevalence of white-owned and staffed cannabis businesses in early legal marijuana adapter states like Washington and Colorado may also be caused by the wealth gap between whites and blacks.

“It’s hard overnight to think that you’re creating a level playing field and then expect that communities that have been historically excluded from the same economic opportunities as whites would just be able to kind of pick up and join those industries as easily,” he said.

In fact, a number of states now have a system that gives advantages to diverse applicants — but they come with strings. In Florida, black farmers were favored for licenses – but they needed decades of agricultural experience — disqualifying many from even applying. In Maryland, regulators were required to seek racial, ethnic and geographical diversity in handing out licenses —  but no black-owned business was awarded a licence. In Pennsylvania, people with marijuana convictions can’t get jobs in the industry.

McKeesport job seeker Bobbie Boyd doesn’t have any past charges — but knows plenty of out of work people who do. “A lot of people from the area were arrested on those charges. If they’re making it a problem like that then I think they’re trying to target a certain type of people,” he said.

But he’s still hopeful about what this new industry could mean for this city.