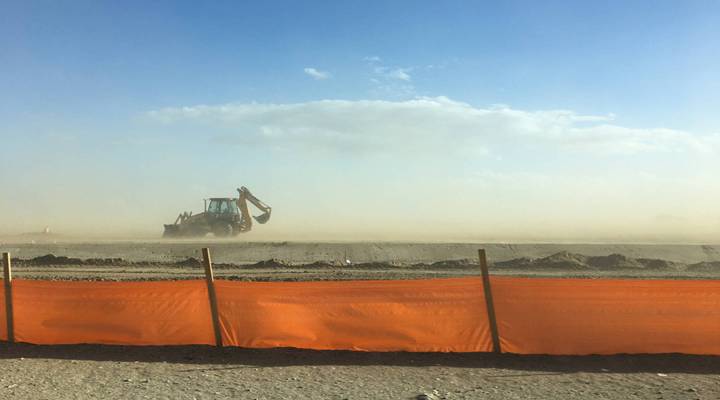 COPY
In the area now dubbed The Green Zone, land is being cleared for massive marijuana grow warehouses. David Weinberg

In January of next year, California will become the largest state in the country to legalize recreational marijuana. Medicinal marijuana is already legal in the state. Now, some cash-strapped cities in California are hoping to revive their struggling economies by becoming the first to open their doors to the marijuana industry.

One of those cities is Adelanto, a high desert town in the Mojave Desert that had been teetering on the verge of bankruptcy and nearly ended its relatively short life as a city. But after a 2014 city council election, several new council members were voted in along with a new mayor, and they’ve set in motion a radically ambitious plan to make Adelanto solvent.

The western edge of Adelanto is an industrial part of town, home to a handful of warehouses. There’s a company that makes pools, a drone manufacturer, a strip club and the state’s largest immigration detention facility. But the vast majority of the area — like the rest of Adelanto — is empty desert dotted with Joshua trees.

Though lately there’s a new addition to the landscape. Lot’s of big yellow tractors. They’re clearing land for new warehouses to grow and store pot. Land prices in this part of the city have skyrocketed. Some plots have quintupled in price since the city announced plans to allow marijuana cultivation here, in what is now called The Green Zone.

“We had 53 people apply for cultivation permits; 43 have been approved. I believe there’s only one that’s legally up and running right now,” said Jermaine Wright, the city council member who wrote City Ordinance 545 legalizing marijuana cultivation in Adelanto. He said the city has calculated the potential revenue from marijuana grow warehouses and made a prediction on the low side. “The larger facilities should be bringing in about $75,000 every three months to the city in taxes.”

Several marijuana companies are investing heavily in infrastructure in Adelanto, including one 600,000-square-foot warehouse that will be one of the largest grow facilities in the state.

If those predictions are accurate, tax revenue from weed businesses alone could reach $12 million by the end of next year. Just to put that in perspective, the entire Adelanto city budget last year was $13 million.

This potential flood of cash could not have come at a better time. In 2014, the city was nearly $4 million in debt and had begun the process of basically giving up as a city and filing for bankruptcy. And this isn’t the first time Adelanto has looked to one industry to save it’s failing economy.

The city is home to three prisons, with a fourth just outside city limits. But those facilities never brought in the jobs or revenue the city had hoped. And they saddled Adelanto with a reputation as a prison town. Still, the need for jobs here is acute: The unemployment rate is double the national average, and more than 40 percent of the residents live below the poverty line.

Adelanto learned an important lesson from its relationship with the prisons, which hired most of its employees from outside Adelanto. Now by law, at least half of all the employees hired by any marijuana companies must live in Adelanto.

At a local little league game, parents gathered in the bleachers, cheering on their 8- and 9-year-old kids. They had  a range of opinions when it came to Adelanto’s plans to become a marijuana boom town. Some were adamantly opposed to welcoming weed businesses. Others, like Vicki Berigan, said she was concerned about how it would affect her 9-year-old daughter, but she said she also saw the potential economic benefits.

“So that’s a plus if there is going to be jobs available. That’s something to think about,” said.

For all those jobs to materialize, a lot of things that have to go exactly as predicted. And predictions are a tricky thing in America’s rapidly changing marijuana industry.

Beau Kilmer, co-director of the RAND Drug Policy Research Center, said the federal government could crack down on growers. But there is also a worry that things could go in the opposite direction. What if down the road, the feds legalize marijuana in every state and growers can ship it across state lines?

“It’s not totally clear to me where the optimal place is to do that type of production,” Kilmer said. “It might not be California. You could probably produce all the THC that is consumed in the United States on a few dozen farms in Iowa.”

For now, California is the largest grower and consumer of marijuana in the country. And state lawmakers plan to have new rules in place legalizing recreational pot by January. Cities like Adelanto, that have a head start on building a legitimate marijuana infrastructure, hope to capitalize on the coming changes to the law.